TV & Home cinema reviewsHiFi  reviewsGuides videos & Live sign up helpline
Menu
By clicking “Accept”, you agree to the storing of cookies on your device to enhance site navigation, analyse site usage, and assist in our marketing efforts. View our Cookie Policy for more information.
Open peferencesDeny allAccept all
Written by
Andrew Everard
March 30, 2022

Highlight Award, Audio Magazine (DE)
Features and specifications
Book a consultation
Download brochure
Download brochure
Review
Video review
What the press say
Why you should buy it
Gallery
Pair it with
Alternatives to consider 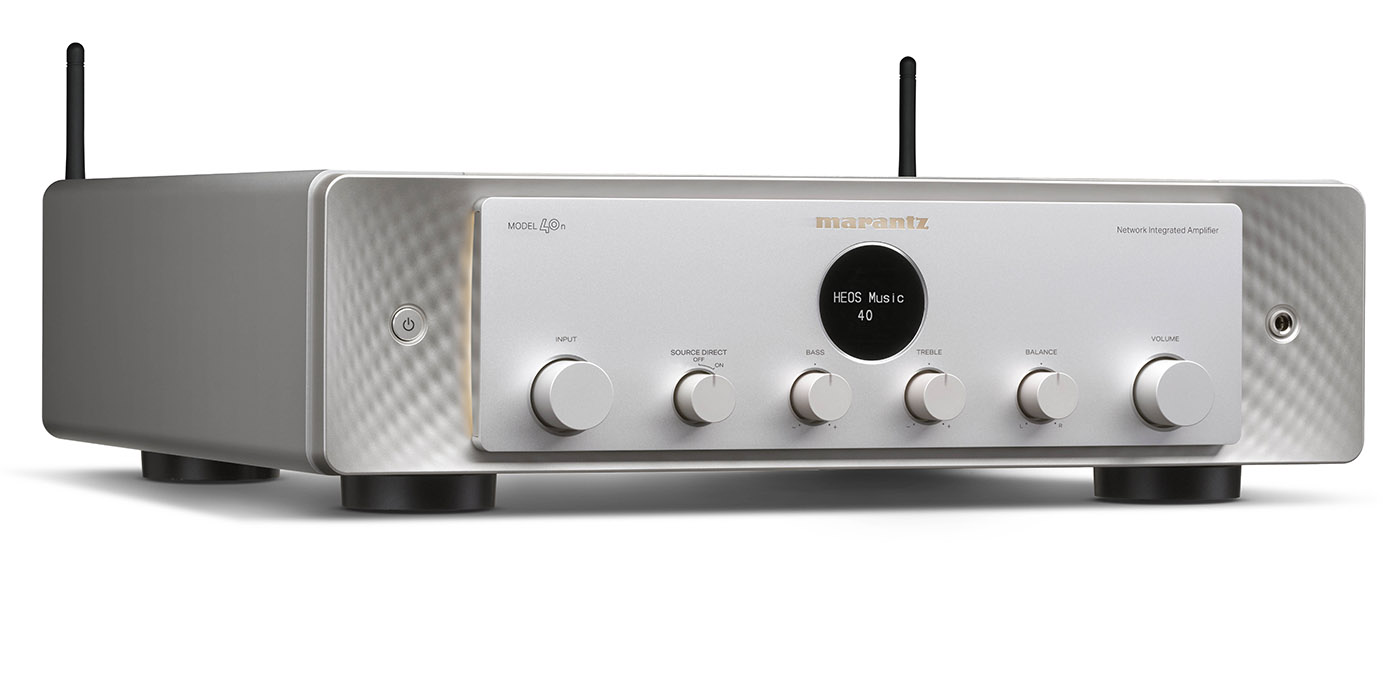 So, what’s this then? It looks just like the Marantz Model 30 stereo amplifier, but it packs full network audio capability, Bluetooth, and the smart HEOS multiroom system. And yet it’s less expensive than the model on which it seems to be based. Except this isn’t a 30 with networking: this one is pretty much a clean-sheet design, at least internally, and has been built to be not just a stereo amplifier with benefits, but a viable ‘just add speakers’ streaming system, aimed squarely at the network audio products from the likes of Cambridge Audio, NAD and Naim.

In other words, this is network audio for those who like their system to look like hi-fi – well, Marantz’s ‘Modern Musical Luxury’ take on it anyway, with its hints of models from the company’s history and LED lighting emphasising that two-piece front panel design. And while the retro theme extends to that ‘porthole’ display front and centre, you won’t want to be using that too much for serious streaming – instead, the Model 40n is best operated with the HEOS app running on your phone or tablet, opening up the likes of Amazon Music, Spotify Connect, Tidal and TuneIn as well as streaming from network music stores on a computer or NAS unit, and enabling the Marantz to do its multiroom thing with other Denon and Marantz products, including the Denon Home wireless speakers, allowing your music to follow you around the house.

Marantz has managed to build all this into the Model 40n without compromising quality: internally the potentially noisy power supply section is kept well away from all the audio electronics, while the streaming section, digital-to-analogue conversion and high-quality phono stage for a turntable are shielded from the audio circuits – and each other – in a complex metal housing. It’s all about maintaining audio purity while adding loads of flexibility: there’s even an HDMI input to make it easy to run your TV sound through the amplifier, and you can play music to the Model 40n using Amazon, Apple or Google voice commands. That’s another thing HEOS brings to the party.

The 40n has less power than the Model 30 – 70W per channel instead of 100W – and uses more traditional amplifier technology than the 30’s hi-tech, ultra-efficient Hypex amp modules, but you’d never guess it from the way it performs. Marantz has pulled off the trick of making this a hugely comprehensive ‘system in an amplifier’ without compromising on sound quality, and the 40n has that typical big, rich sound with bags of detail, and above all sounds entirely natural whatever you choose to play. It drives as hard as any of us could sensibly want – and then more – without any signs that it’s having to work for its living, and whether shaking the room or shimmering through some late-night jazz, its balance is consistently involving, dramatic and easy to live with.

Yes, the sound here is very commercial, but since when was that a bad thing? There’s no sharpness or shriek even with the most enthusiastic vocals, the bass feels superbly extended and well-defined, and instruments and voices just sound – well, real. But it’s the way this amplifier places everything in a realistic sonic picture before the listener, whether streaming hi-res music or a programme from rock and pop radio, and the phono stage here – a Marantz in-house design – will delight those who prefer their music from big black discs. Above all, it pulls off the trick of being supremely easy to listen to while at the same time highly entertaining, meaning it works with a wide range of speakers and still conjures up some real magic.

Living with the Model 40n

Whether you want to update your system with a network-capable amplifier or are looking for that ‘just add speakers’ convenience, the Model 40n will deliver: it has the power and control to drive everything from high-quality bookshelf speakers to hefty floorstanders, is simple to set-up and use, and has just enough extra inputs to accommodate an existing set-up’s CD player and the like. Add in the almost magical HEOS capability, with extra speakers in the kitchen or wherever, all under app control, and the Marantz can become the hub of a whole-house music system.

Marantz has managed to turn its purist Model 30 design into a highly flexible ‘system in an amplifier’ concept, and while the ‘lifestyle’ label sometimes suggests corners being cut in terms of audio performance, there’s no sign of that here. It works both as an excellent hi-fi amplifier and an all-in-one system, and that makes it highly appealing.

If all you know of conductor John Wilson is his ‘Hollywood Prom’ concerts, this album of Ravel orchestral music will be an eye-opener. With a handpicked group of musicians and a massively detailed sound, it’s a fabulous set, opening in barnstorming fashion with this track, and concluding with a similarly dramatic Boléro.

Christine and The Queens: 5 dols

This French-language version of 5 Dollars from the Chris set really shows off the ability of the Marantz to do warm and dramatic at the same time: every detail is delivered intact, while the track has punch and drive, plus a real sense of the performers before you

Perhaps best known for Angela, the theme from the old TV comedy Taxi, James cruises through a set of his tracks and standards on his Feel Like Making Live! Album, including this Elton John cover. The Marantz goes into lush, hyper-intimate mode with these tracks – just about the perfect late-night sound

Hi-Fi News praised the Model 40n for adding all the extra flexibility without compromising the traditional values at the core of the brand's identity, and said it  cater for both streamers and vinyl fans alike with a stylish premium package. What Hi-Fi? was taken with it, too, describing it as a just-add speakers solution for all your streaming needs, while Alpha Audio found it worked well with high-end speakers including Focal’s Sopra and the Bowers & Wilkins 800 Series

Is this all the hi-fi you’ll ever need? Well, with the addition of some speakers, the Marantz could be just that, thanks to its solid combination of an excellent sound and massive flexibility. However you use it, you won’t be disappointed 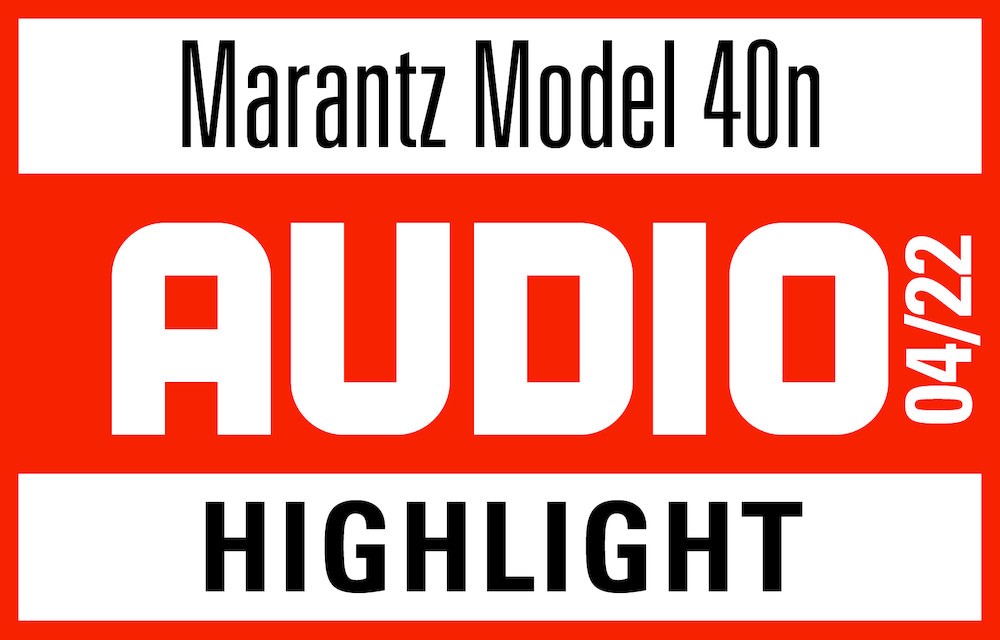 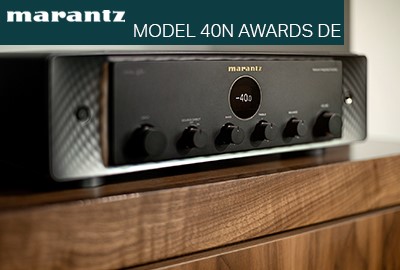 Able to drive a wide range of speakers, the Marantz will work particularly well with the 600 and 700 series from stablemate Bowers and Wilkins - it has more than enough power to drive the 603 Anniversary or 703 S2 floorstanders, while in smaller rooms either the 605 Anniversary or 705S2 bookshelf/standmount models will be a fine match. There’s also a new CD 60 CD player from Marantz, designed as the perfect match for the Model 40n.