TV & Home cinema reviewsHiFi  reviewsGuides videos & Live sign up helpline
Menu
By clicking “Accept”, you agree to the storing of cookies on your device to enhance site navigation, analyse site usage, and assist in our marketing efforts. View our Cookie Policy for more information.
Open peferencesDeny allAccept all
Written by
Andrew Everard
November 28, 2022

A POWERFUL, PRECISE-SOUNDING HEADPHONE SOLUTION, MAKES A SOLID CASE FOR TREATING YOUR CANS TO SOMETHING ABLE TO DRIVE THEM PROPERLY 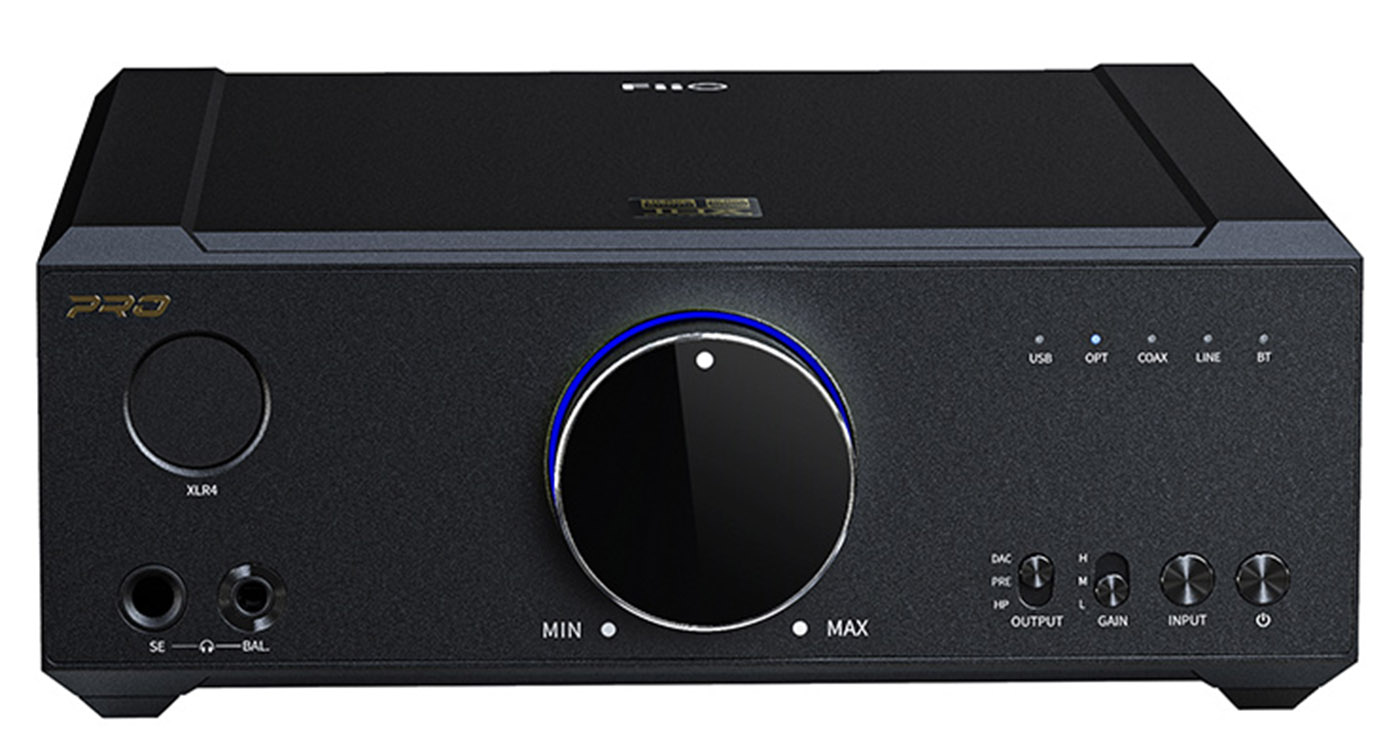 Yes, the name of the £699 FiiO K9 Pro ESS Edition is a bit of a mouthful, but there’s a story behind it – and it’s one that’s been affecting many hi-fi manufacturers.

The original version was built around a digital-to-analogue conversion chipset from AKM, the Japanese semiconductor company that fell victim to a disastrous fire in October 2020, severely hampering its production capacity. Faced with a DAC shortage, the engineers at China-based FiiO had no option but to re-design their flagship DAC/headphone amp to use a conversion system from US company ESS.

Are you still with us?

The result is this ‘ESS Edition’ model – and it’s a cracker! Designed for those who take their headphone listening seriously – though it does rather more than accept audio from a computer and feed it out to a pair of earphones or headphones – , it’s a solidly-built mains-powered unit, clad in high-quality aluminium casework finished in black to high standard, and using an amp-on-a-chip solution from THX – yes, the surround-sound people – to drive the headphones. And while the main task here is powering headphones, the FiiO can also be configured to work as a standalone DAC to feed a hi-fi system, or even as a simple preamp for use straight into power amps or active speakers.

Along with USB-B for computer connection, and optical and digital inputs, there’s Bluetooth able to accept everything from plain vanilla streaming from a phone to aptX HD, Low Latency and Adaptive versions, and also the Sony-developed LDAC codec used by some of its phones for hi-res audio. There’s even a side-mounted USB-C port, designed for a quick hook-up of phones and tablets if you prefer to stream wired. Via the USB inputs, the FiiO can play music up to the highest of hi-res – up to 768kHz/32-Bit and native DSD256, and it's also MQA enabled, for example of hi-res Tidal streams.

But you don’t even need to use digital sources: there are analogue inputs on standard RCA sockets and a little 4.4mm Pentaconn socket for balanced signals, while outputs to an amp are on both RCAs and balanced XLR sockets, with the choice of running these at fixed level into a conventional amp, or controlled via the front-panel volume control for preamp functionality.

Headphone listeners are treated to not just a standard 6.3mm socket, but also balanced output on a choice of another 4.4mm Pentaconn or a four-pin XLR, meaning that just about any kind of ’phones can be accommodated without any hassle – well, unless your headphones only have a 3.5mm plug, but then FiiO includes an adapter for those in the package.

And there’s plenty of power to drive any headphones you throw at the K9 Pro, with the company claiming an output of over 2W to drive tricky low-impedance headphone loads. Compare that with the output of most phones and even laptops, with is usually a fraction of what the FiiO delivers, and you’ll immediately see its advantages – it’s not a matter of just going louder, but rather better control and dynamic ability to make the ’phones perform better. There’s also user-selectable gain, in case your headphones need more oomph, or to give better control at low volumes.

The internal design here is all about sonic purity, with digital and analogue sections separated both physically with shielding and in the power supply design, to exclude interference for optimal performance, and while the K9 Pro is simple to operate via the front-panel controls, there’s also the option of driving it using FiiO’s dedicated Control app, running on Android or iOS devices. This connects via Bluetooth, and allows detailed set-up of the unit, including switching off the bright coloured ring around the volume control used to indicate the quality of the incoming digital signal, but given that a headphone amp is almost by definition going to be used within reach of the listening position, the app may be slight overkill. Fun, though…

Whatever your choice of ’phones, from high-quality earbuds to big power-hungry on-ear and over-ear designs, it’s immediately clear that this little box, at just 22cm wide to fit on any desktop – and you can even stand it on end to save space – is doing a fine job of driving them properly. It delivers a sound with total conviction and focus, and while both the enhanced levels of detail and dynamics are instantly apparent, what’s even more in evidence is that you’re hearing more of the music. If you ever find yourself fearing that headphone listening might only be a poor substitute for a big pair of speakers, the FiiO is here to convince you otherwise with its bold, totally involving sound.

It does all this without the ‘fiddle factor’ of some rival designs, which provide a bunch of digital filters to confuse the listener, along with all kinds to settings to boost the bass or set levels of crosstalk between the channels in an effort to give a more ‘speaker-like’ – read confused – sound. Instead, it plays things simple, passing through as much of the original recording as possible using its eight-channel DAC in differential mode for signal purity, and throws the task of creating a realistic listening experience on the designers of your headphones.

As a result, it sounds magnificent when playing through refined headphones such as the long-running Bowers & Wilkins flagship model, the P9 Signature: they can sound a bit soft and lush when used with some headphone output sections, but really thrive on the end of the direct, revealing FiiO amp, whether kicking up a storm with the live Bowie tracks on the Moonage Daydream soundtrack, or cruising through some intimate jazz or well-recorded vocals.

Much of the appeal here is the supremely effortless way in which this little amp conveys music: as already mentioned, it’s not just a matter of being able to ‘go loud’, although the FiiO will easily drive headphones to levels well beyond sensible without any signs that it’s working hard, but rather the way it sets free the dynamics of the music, allowing everything from the quietest touch of stick on cymbal to the full-on power of a symphony orchestra to be appreciated. This isn’t amplifier to have you constantly adjusting the volume level to hear all the nuances of a piece then wind things down when it all gets a bit overbearing – it's ‘set and forget’ once you’ve established a comfortable listening level, leaving you to get on with enjoying the performance, which is just as it should be.

True, some listeners may prefer a warmer sound to flatter less accomplished headphones, but that’s not what the FiiO is about: it has all the bass weight and control you could want, along with a sparkling crisp treble and wide open midband that really brings out the character of voices and instruments, but it’s all about directness, leaving tonal adjustments to the recording engineer and the headphone designers. And you really couldn’t ask for much more than that.

Shorn of all superfluous features, the FiiO couldn’t be much simpler to set up for great sound. Directly powered from the mains – there’s no plug-top transformer here – it’ll sit comfortably on your desktop, or to the side of your listening seat, and instantly provide a sound to delight even the most fanatical ‘head-fi’ fan. Now all you have to do is find yourself a pair of ’phones to make the most of its abilities.

Sitting atop a strong range of DAC/headphone amps – both portable and desktop – from FiiO, the K9 Pro ESS Edition has made the most of adversity, in the form of an enforced chip-change, to create an amplifier more than  capable of driving all kinds of headphones with real poise and conviction. If you’re serious about ‘head-fi’, it’s a must-listen.

Taken from the Brooklyn band’s latest covers EP, Fun Machine – The Sequel, this jazzy, funky version of the Pointer Sisters hit is a standout in a set with not a duff track to be heard. The FiiO digs out all the detail, and revels in the sheer quality of vocalist Rachel Price’s impressive voice.

Conductor John Wilson has an ongoing love of music from the big screen, and on his Hollywood Soundstage set leads his hand-picked musicians through a sweeping sequence from the Hitchcock classic, from romantic themes to high drama – and serious dynamics!

KEVIN ROWLAND & DEXYS MIDNIGHT RUNNERS Until I Believe In My Soul

Having gone back and revisited his classics, Rowland has come up with the Too-Rye-Ay As It Should Have Sounded set, from which this live track is just one of the revelations. Superb performances and a big, rich, but tightly-focused sound come together to show what the FiiO can do.

Control via FiiO app for Android and Apple iOS