TV & Home cinema reviewsHiFi  reviewsGuides videos & Live sign up helpline
Menu
By clicking “Accept”, you agree to the storing of cookies on your device to enhance site navigation, analyse site usage, and assist in our marketing efforts. View our Cookie Policy for more information.
Open peferencesDeny allAccept all
Written by
John Archer
August 3, 2022 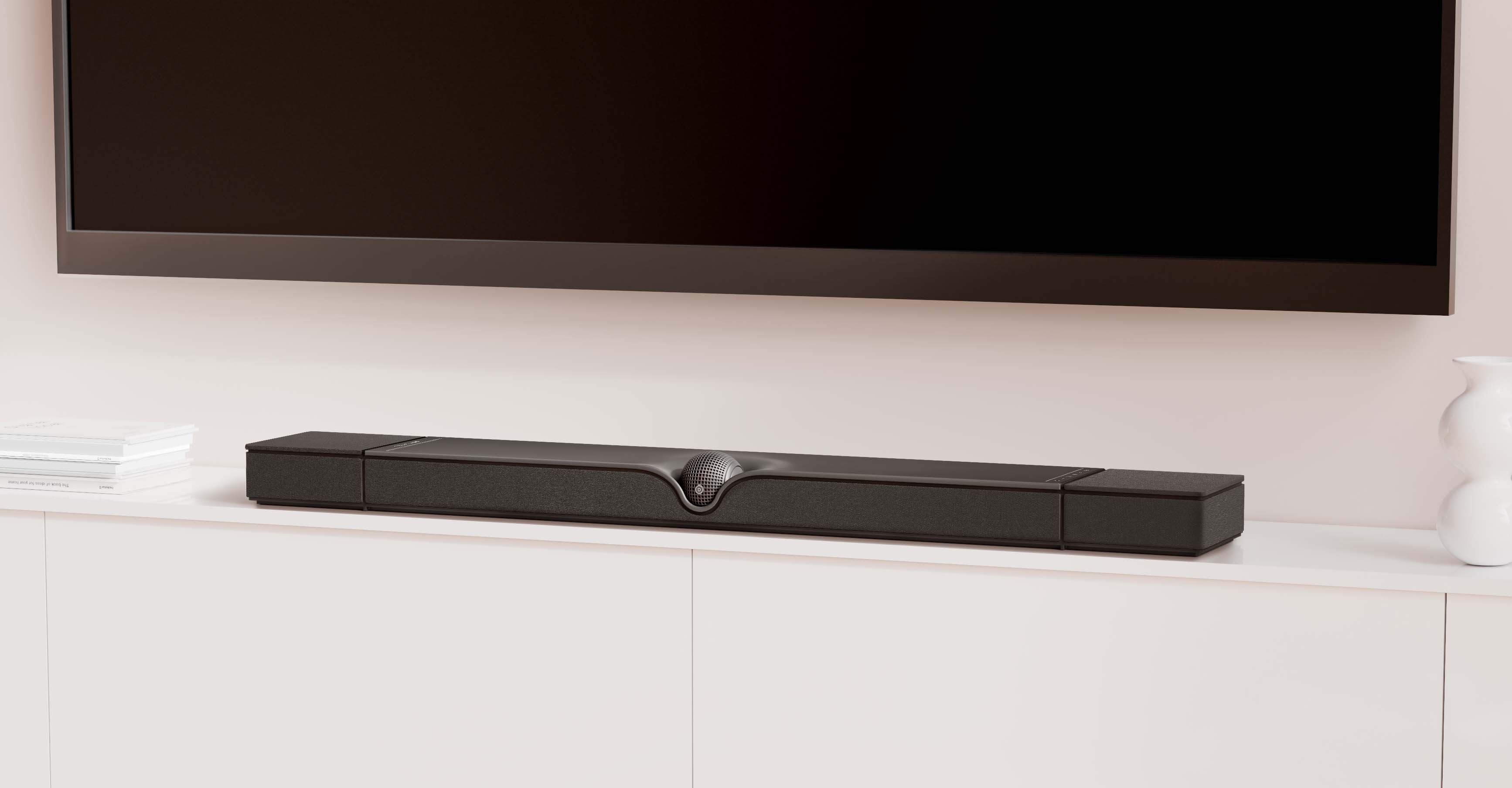 The Devialet Dione might just be the most innovative and inventive soundbar we’ve ever seen. Partly because of the way it gets bass levels out of its stylish one-bar design that many dedicated subwoofers struggle to match, but mostly because of its unique Orb: A spherical centre speaker that can actually be physically rotated in its mounting groove so that it’s always firing sound in the right direction regardless of whether the soundbar is sitting on a desktop or hanging on a wall.

The big question for any soundbar that boasts a design feature as overt as the Dione’s Orb has to be whether it still sounds good, or whether it’s a classic case of style over substance. Happily, we can report that the Dione still sounds very good indeed.

Understanding why requires us to discuss the soundbar’s design in more detail. Starting with the fact that it’s a single bar solution, with no external subwoofer or rear speakers either included or available as options.

It can be made part of a multi-room installation using Airplay 2, though, and crucially fits all manner of sound quality wizardry into its compact but heavy duty form, including nine custom-designed full-range aluminium drivers, and no less than eight aluminium long-throw subwoofers.

It appears at first glance to be designed - as most soundbars are - to sit with a relatively flat profile beneath a TV. Being able to rotate the Orb and so adjust the direction of its sound, though, means that unlike most soundbars, you can also hang the Dione on a wall and have it retain the same flat profile it enjoys in its desktop configuration.

The front speakers in a desktop configuration become the up-firing speakers when the Dione is wall mounted, while the speakers that were the up-firing drivers become the front-firers. An impressively sophisticated auto calibration system that uses no less than four mics in the soundbar ensures that the sound is always optimised for whichever configuration you’re using - and your specific room setup and conditions.

Let’s start our assessment of the Dione’s audio talents by focusing on that startling Orb centre speaker. Two things strike you right away. First how exceptionally clear and crisp its sound is, and second how far it manages to project its sound considering how small it is. The spherical shape seems to be responsible for both of these strengths, with the circular design eliminating the potential for the ‘standing waves’ you can get with regular rectangular speakers, while also allowing the sound to be delivered in a wide splay. Not quite a full 360 degrees, but much closer to it than than any regular centre channel driver can manage.

The Orb’s smallness relative to the rest of the soundbar may explain why it can make very high pitched sounds occasionally appear slightly peaky. For the most part, though, you’d never guess for a second that such powerful, well dispersed and well-rounded sounds could be coming from such a miniature bit of hardware.

Also remarkable is how well the Dione’s other drivers exchange roles when you move from desktop to wall mounting. This clearly demonstrates that Devialet has resisted the temptation to skimp on the power and quality of any of the Dione’s drivers.

This uncompromising approach is blissfully apparent, too, in the spectacular combination of detail, consistency and power the non-Orb speakers serve up. The soundstage is pushed far beyond the soundbar’s own physical boundaries, easily filling the front half of even large living rooms with an immersive wall of sound that enjoys clear height as well as width.

The sound pushes forward enough, too, to create a convincing three-dimensional audio space into which Dolby Atmos effects can be placed. Each of its 5.1.2 distinct channels are effectively steered, and the drivers have enough dynamic range and power (Devialet claims a massive 950W RMS) to produce a fantastically rich and well-rounded sound capable of delivering fearsome impact with favourite action movie moments.

There’s no hint of brittleness or compression at either the bass or treble extremes of the non-Orb drivers, either, even when you’re running the Dione at far higher volumes than most soundbars could even dream of reaching.

That brief mention of bass back there is nowhere near enough to do justice to just how good the Dione is at delivering the sort of low frequency sounds home cinema fans love to hear. You do need to run the Dione pretty loud before the bass really starts to sing, but once you’ve pumped up the volume enough you’ll find it almost impossible to believe the Dione is delivering so much bass without using an external subwoofer.

There’s no sense of the bass ‘bottoming out’, either, backing up Devialet’s remarkable claims of a 24Hz response. What’s more, despite its potency the bass never feels baggy or detached from the rest of the mix, never overwhelms the treble detailing or dialogue, and never causes the soundbar’s cabinet to rattle or buzz.

The Dione is as impressive with stereo music playback as it is movies - something that sets it apart from some of the premium multi-component soundbar packages out there. Vocals are beautifully staged, with lovely clarity and character, while the rest of a mix enjoys excellent dynamic range, width and clarity without falling into the traps of dryness or imbalance many soundbars suffer with when trying their hand at music.

Devialet has created a proprietary SPACE processor for the Dione that can convert stereo music to take advantage of the soundbar’s full 5.1.2 channel count. This works well with bass-heavy or relatively lean tracks, and can add concert-hall scale to orchestral pieces. It can also, though, sound quite tiring and unnatural with relatively dense music. So we’d recommend handling the SPACE mode with care.

The biggest limitation of the Devialet Dione’s performance is that it only delivers sound in front of you. There’s really no sense of even vague ambience, never mind accurately placed sounds, appearing from behind your seating position. This is true, though, of pretty much all single-bar solutions, and would likely be a compromise the vast majority of potential buyers will already have accepted before opting for a single-bar soundbar.

Living with the Dione

The Dione’s single bar approach just can’t deliver a true surround sound experience. It does, however, do brilliantly what it’s clearly designed to do: Produce a much bigger, more detailed and more immersive stage of sound than pretty much any other single-component soundbar.

Its connectivity is a little frustrating in that it doesn’t include an HDMI loop through. So to get Dolby Atmos soundracks into it, you’ll need to connect your TV’s so-called ARC or, ideally, eARC HDMI port to the soundbar, so that Atmos tracks can be passed on via the TV (assuming your TV supports ARC/eARC and Atmos pass through). This should work just fine for most users, although  we should add that some ARC/eARC setups can suffer with audio/picture sync issues.

One other limitation is that the Dione doesn’t support the Dolby Atmos-rivalling DTS:X sound format. So if you play a film like Jurassic World: Fallen Kingdom that carries a DTS:X mix, the Dione will receive it as stereo and then upconvert it using its SPACE system.

Very unusually for the soundbar world, the Dione doesn’t ship with a remote control, relying instead on a pretty straightforward - and free - iPhone and Android controller app. You can buy a fancy circular-shaped Devialet remote as an option, but this costs more than we think most Dione buyers will want to spend.

The final thing to stress here is that the Dione is a better music and movies all-rounder than most of its rivals.

Provided you’re OK with the lack of DTS:X support and a dedicated remote control, the Devialet Dione is an inspired combination of cutting edge technology, innovative engineering, premium build quality, unique styling and, best of all, outstandingly powerful and rich sound.

We ran this one through the Dione because it deploys a DTS:X soundtrack, which the Dione doesn’t support, leaving you depending on the soundbar’s SPACE remixer to create a multi-channel experience. As it happens, SPACE does a good job of enlarging the soundstage and giving it a 3D presence, though it’s not as satisfying as a true Atmos mix.

From the monstrous bass ‘drop’ that opens its immense soundtrack to the soaring synths of its Vangelis-inspired score and countless immersive elements of its dystopian future cityscape, Blade Runner 2049’s Dolby Atmos soundtrack pushes the Dione to its mostly outstanding limits.

During any of the scenes in 1917 that feature shooting, shelling or the camera tracking through busy groups of soldiers, the Dione’s precision, power and ability to paint a 3D audio space accurately with Dolby Atmos sources really brings Sam Mendes’s ‘one shot’ world to terrifying life..

If you’re looking for a single-component soundbar that fills even large rooms with a clean, powerful and dynamic soundstage that can adapt unusually well to both music and movies, the Dione’s massive power, remarkable bass and exceptional precision make it a uniquely brilliant addition to the soundbar world.