TV & Home cinema reviewsHiFi  reviewsGuides videos & Live sign up helpline
Menu
By clicking “Accept”, you agree to the storing of cookies on your device to enhance site navigation, analyse site usage, and assist in our marketing efforts. View our Cookie Policy for more information.
Open peferencesDeny allAccept all
Written by
Steve Withers
April 12, 2022

Ideal for up to 55in TV, the Home Sound Bar 550 will give you a taste of Dolby Atmos surround

We've seen this on sale on Denon.com for £449, fantastic value

Denon has been building a range of products based around its HEOS multiroom system, and the Home 550 is the new soundbar option within a line-up that already includes the Home 150, 250 and 350 wireless speakers. All these models offer high-resolution music support and multiroom functionality, but the soundbar also adds a number of features aimed at TV and film fans.

The most obvious benefit is the ability to decode Dolby Atmos and DTS:X object-based audio, although this sense of immersion is achieved through digital signal processing rather than actual speakers. However you can add wireless surrounds and a subwoofer using other HEOS products, plus there’s extensive connectivity, integrated music streamers and built-in voice assistants.

The Denon Home 550 handles its dual roles with genuine skill, allowing it be both an effective speaker for listening to music as part of a HEOS system, and an excellent soundbar for boosting the sonic qualities of your TV.

This is primarily thanks to a system based around a pair of high quality speakers, each of which is composed to two 55mm full-range drivers and a 19mm tweeter. There are also three 50x90mm passive radiators – two at the front and one at the rear – to help boost the bottom end sounds.

Denon hasn’t disclosed how much amplification is driving these speakers, but in testing this soundbar was able to reach unsociable volumes without losing its cohesion or distorting. The combination of all these factors allows the Home 550 to sound much bigger and bolder than it looks.

With music the soundbar produces an accomplished delivery that remains tight and detailed. The treble is rendered with flair, remaining clear and well-defined, while the midrange is free of congestion. The bass is also nicely integrated, with precise transients and a degree of poise.

Of course, as a single unit with no separate subwoofer the bass doesn’t mine the depths of a good ‘bar and sub combo, but it’s perfect for delivering music with speed and impact, while remaining coherent and balanced in terms of the overall soundstage.

The lack of seismic bass is apparent when watching movies, especially modern blockbusters, which often use lower frequencies to give the action more of a kick. However, the Home 550 doesn’t disgrace itself and the passive radiators do a good job of laying a bass foundation.

The Denon is also impressive with 5.1 soundtracks, generating a decent soundstage that handles TV shows and films with energy and verve. Despite the lack of a dedicated centre speaker, dialogue remains clear, while music and effects are placed around the screen with precision.

However, expectations need to be managed because the relatively small cabinet and lack of side-firing speakers does limit the width of the soundstage a bit.

When it comes to Dolby Atmos and DTS:X, the Home 550 uses psychoacoustic precessing to trick the brain into thinking sounds are emanating from the side and above. This work pretty well, creating a sound field that feels more full-bodied and dimensional, but it isn’t quite as effective as a soundbar that employs upfiring speakers to generate the overhead channels, but what are you going to find that does that at this price?

The Denon Home 550 forms part of Denon’s HEOS fraternity of wireless speaker, which are designed to build a proprietary streaming network. This multiroom music system allows you to stream audio between any speakers, soundbars and AV receivers dotted around your home.

The HEOS app makes setup easy, and even integrates third-party music sources like Spotify, Deezer and Tidal. It also acts as a touchscreen controller for the Home 550, although Denon includes a dinky remote for those who prefer the old-school approach.

There are also some basic controls on top of the cabinet, but you might find yourself using the remote app more than you expect because there’s no real display to show what the Home 550 is actually doing. That said the design is attractive if unassuming, and the build quality is very good.

The connectivity is fairly standard, with an HDMI input, and HDMI-eARC output, an optical digital input, and a 3.5mm analogue input. In terms of wireless connectivity there’s built-in Wi-Fi, Bluetooth 3.0, and AirPlay 2.

The HDMI-eARC connection makes setup even easier and provides seamless integration with your TV, including using its remote as an alternative controller. It also supports 4K/60p, HDR10, and Dolby Vision, plus you can send lossless audio back from your TV thanks to eARC.

The Home 550 has built-in Alexa functionality, which turns this soundbar into a fully-functioning smart speaker. This means you can change the volume without having the remote or app to hand, ask the ‘bar questions, or even get it to tell jokes.

While primarily designed as a multiroom system, HEOS also provides the Home 550 with the ability to expand its soundstage by adding wireless surrounds and a subwoofer. This surprisingly easy using the remote app, and the result is an impressively immersive 4.1-channel system.

This film is a dumb but fun adaptation of the popular video game, and it boasts one of the biggest and most immersive Dolby Atmos tracks you’ll ever hear. The bass is appropriately monstrous, with a beast of a soundstage that’ll give any object-based soundbar a serious run for its money.

This globe-trotting action franchise gets more ridiculous with every instalment, but the awesome Atmos soundtrack delivers all the vehicular nonsense with depth and scale, including when a car is launched into space. The added dimensionality gives the orbital insanity some zero-g sonics.

This dino reboot is a worthy successor to the original film, and delivers an equally impressive DTS:X soundtrack. The scene where the ‘asset containment’ team searches for the Indominus Rex features plenty of surround and overhead action as the hunters suddenly become the hunted.

Tech Radar was impressed with the way this compact soundbar delivered a scale of sound way beyond its size, while AVForums appreciated the way its ability to handle music with accuracy and clarity made it just as effective with general TV viewing, especially using the frill-free ‘Pure’ mode. Home Cinema Choice, meanwhile, liked the way the whole sound hung together, with timing and poise and tightly controlled bass –which they said isn’t always a given with soundbars relying on external subwoofers. And they said the HEOS multiroom system was set up in a just a few minutes.

The Denon Home 550 is a capable two-channel soundbar that produces a presence larger than its diminutive proportions would suggest. Quality speakers ensure a clean delivery, passive radiators give the lower frequencies a boost, and the digital processing provides a degree of immersion from Dolby Atmos and DTS:X soundtracks. Decent looks, solid construction, and a good set of inputs add to its appeal, while HEOS multiroom and high-res audio will please music fans.

The fact that you can add on wireless rear speakers and a sub makes for a great upgrade should you want to at some point. 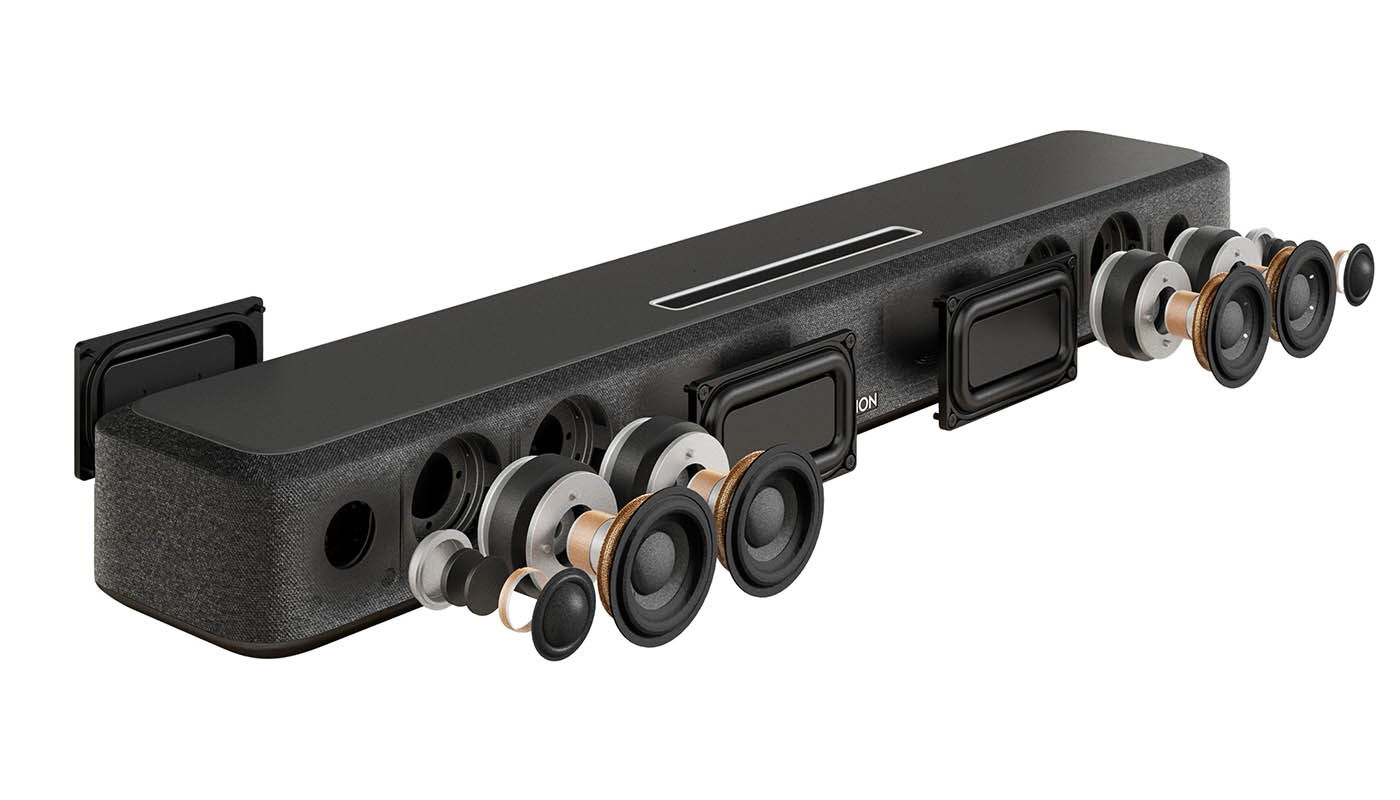 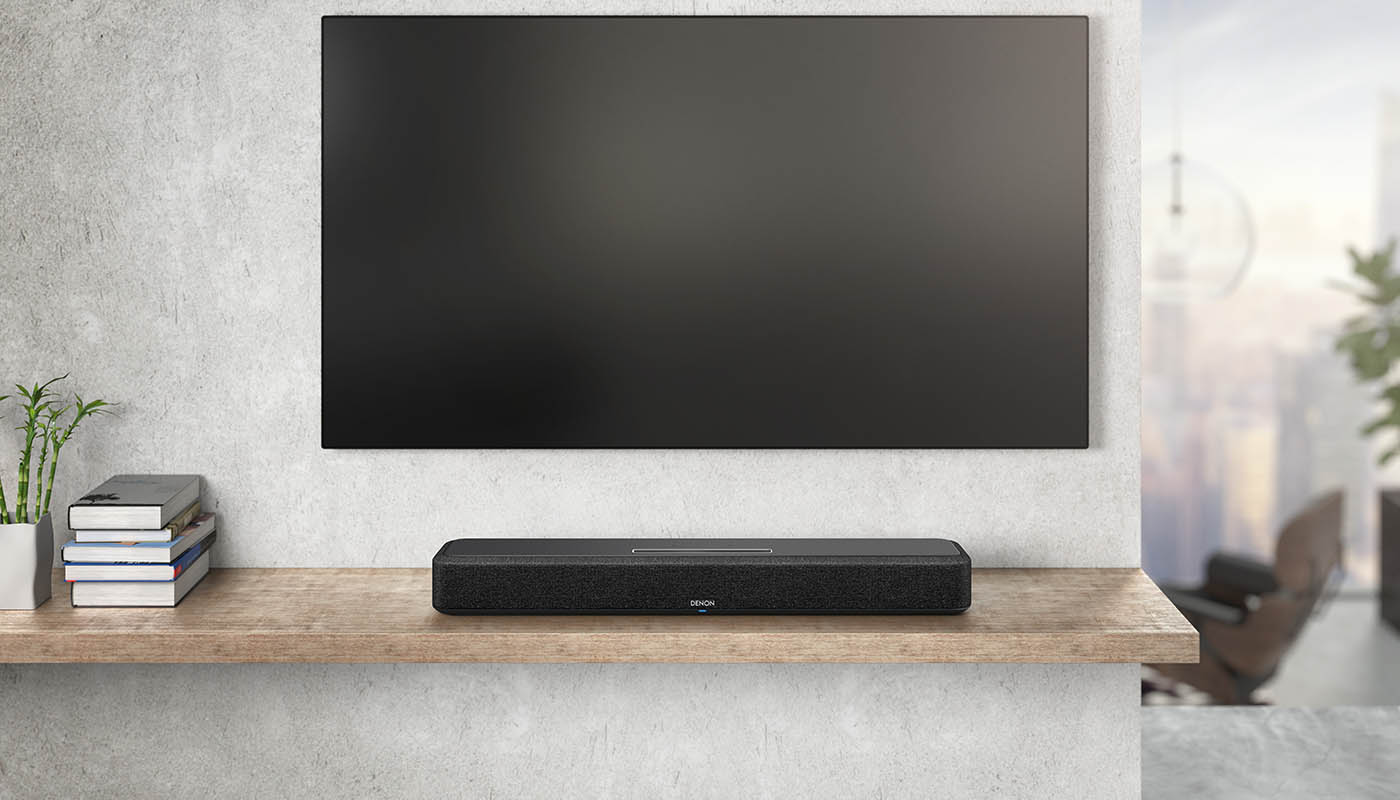 The Denon Home 550 is relatively small for a Dolby Atmos/DTS:X soundbar, and is thus best suited to screen sizes ranging from 40in to 55in, although it sounds big enough not to disgrace itself with a 65in TV. The inclusion of HEOS means you can also use a pair of Home speakers as surrounds (the Home 150 is the most likely candidate), plus a DSW-1H subwoofer in a wireless 4.1-channel system.