TV & Home cinema reviewsHiFi  reviewsGuides videos & Live sign up helpline
Menu
By clicking “Accept”, you agree to the storing of cookies on your device to enhance site navigation, analyse site usage, and assist in our marketing efforts. View our Cookie Policy for more information.
Open peferencesDeny allAccept all
Written by
Andrew Everard
August 10, 2022

Beautifully engineered, the PMA-900HNE from Denon is a great intro to the world of music streaming 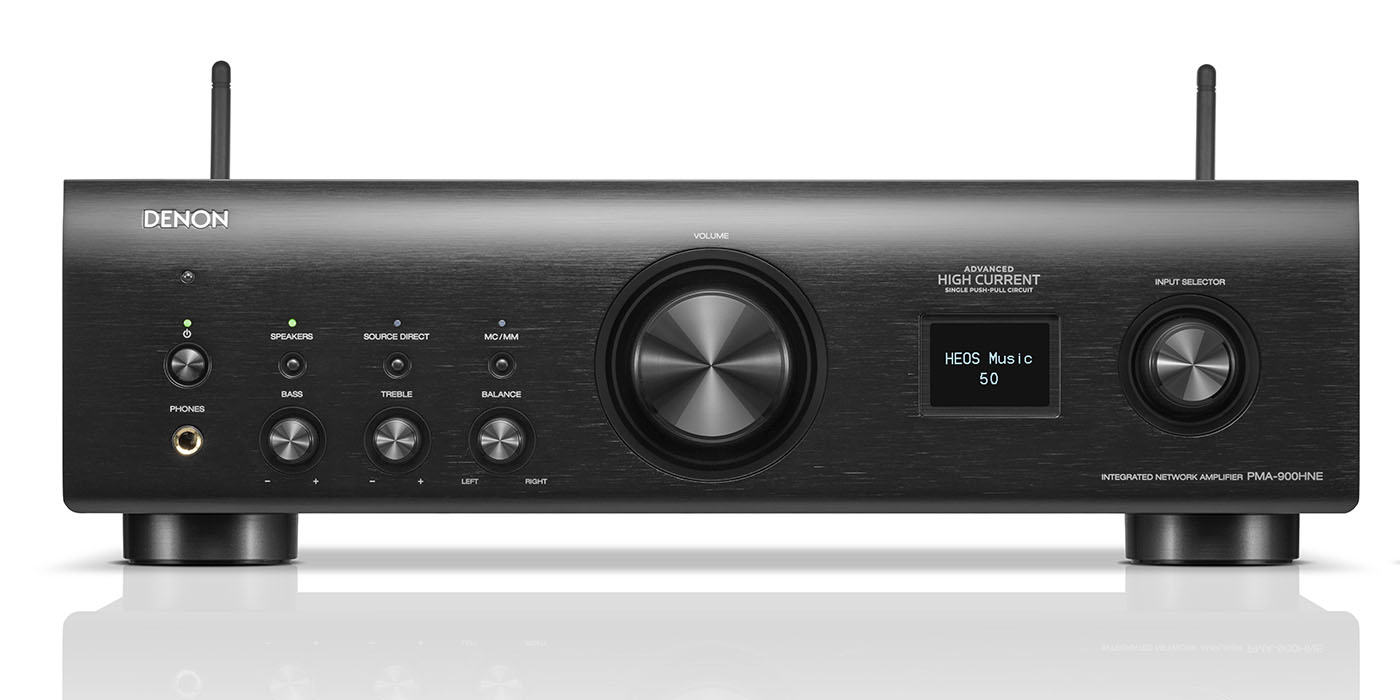 Denon created the HEOS system, which allows simple wireless multiroom audio linking up equipment fitted with the technology. So it’s no surprise that its latest midrange amplifier, the PMA-900HNE, comes fully-loaded with HEOS, enabling it to share music with products from the Denon and Marantz stables, including the nifty Denon Home wireless speakers. But even if you’re not going whole-house hi-fi right now, there’s a lot to like here, in the form of an excellent amp for both analogue and digital sources, with the added benefit of built-in streaming of music stored on your home network or online services.

That opens up the extra possibility of using the PMA-900HNE as a complete ‘just add speakers’ system, albeit one with conventional hi-fi looks: in silver or black, the amplifier looks like a more compact version of the PMA-1700NE Denon launched at the same time, with a little display window on the front panel betraying its digital capabilities – it’s just that, unlike the pricier model, you can ‘drive’ the more compact one with swipes and taps on the intuitive HEOS app, running on your smartphone or tablet.

It’s convincing, too, as a ‘normal’ hi-fi amplifier, even if the Quick Start Guide supplied only covers its set-up as a streaming amp: it has a good range of inputs, including three line-ins for CD players and the like, and a good phono stage for record players with switching for moving coil or moving magnet cartridges. There are also outputs for two sets of speakers, with A/B switching, and a mono output to drive a subwoofer, filtered to only pass very low frequencies. The digital section is comprehensive, too, with three optical inputs – one designed for TV sound, and able to wake up the amplifier from standby when a signal is detected – as well as one coaxial, plus a USB Type B socket to connect the sound from a computer, and a USB Type A for music on storage devices, able to play music all the way up to 192kHz/24bit and DSD64/128, which should be more than enough for any user. Networking is available via Wi-Fi or wired Ethernet, and the amp also has Bluetooth and Apple AirPlay2 wireless streaming.

There’s more than enough power to drive most speakers, with 50W per channel into 8ohms rising to 85Wpc into 4ohm loads, and the PMA-900HNE has a full suite of tone and balance controls, bypassable using a source direct button, and all the major functions are duplicated on a simple, clear conventional remote-control handset.

And if you want to get all purist, you can turn off the network and USB playback, Wi-Fi, and Bluetooth, potentially reducing noise during analogue playback: these functions are in the amp’s menu system, which also allows you to do things such as dimming the display and setting an automatic standby time to save energy. And OK, this amplifier may be built in Vietnam, not in the Japanese factory responsible for the company’s truly high-end products, but it’s still beautifully put together and finished, with smooth, well-weighted controls and real solidity.

There’s definitely a Denon sound – it’s smooth, rich and controlled, yet with impressive levels of detail and fine presence – and the PMA-900HNE lives up to that whether you’re streaming music from Internet radio or playing hi-res content. Whether with BBC Radio 3 Proms or the Manic Street Preachers’ live cover of Sweet Child o’ Mine on the Sleep Next to Plastic set, the weighty yet informatic presentation comes up trumps: this isn’t the most upfront or ‘obvious’ amplifier, but there’s never any sense that the music’s being restrained or toned down: it’s fully able to bring out all the drama and mystery in Danny Elfman’s piece Wunderkammer, which premiered at this year’s Proms, or slam out the Manics at seriously high levels while still having plenty in reserve. That means it can turn on the thrills without ever sounding like it’s hanging on for grime death and on the edge of chaos. Even with a warhorse like Rush’s Tom Sawyer, all driving guitars and swoopy synths plus Neil Peart’s trademark powerhouse drumming, the Denon holds everything together without ever muting the excitement, and even with big, power-hungry speakers will shake the room convincingly with its deft, tautly-controlled basslines. But it’s just as adept with intimate, audiophile-quality recordings – yes, there are some of those worth listening to – with which it’s more than capable of creating impressively three-dimensional soundstage images before the listener when used with suitably revealing speakers. And yes, that phono stage is rather good, and more than able to stir the vinyl fan’s soul with modest-to-midrange turntables, reinforcing the impression of this as a complete package for the money.

Thanks to that streaming capability, you could start with just an Internet connection and some high-quality speakers – think Bowers & Wilkins 606 S2 Anniversary Edition standmounters, for example – and you’ll be playing music in minutes with nothing more than the Quick Start Guide and your smartphone to control things. But the wide-ranging flexibility of the PMA-900HNE means this is an amplifier able to keep growing with your system – before long you’ll be streaming music to Denon Home speakers all round the house with just as much ease!

Whether you buy it for the streaming or the multiroom ability, or just as a futureproofed hub for your current system, the Denon is convincing: the HEOS implementation is slick and easy to use, enabling you to switch seamlessly from your own music collection on computer storage to online streaming services or even the intriguing world of Internet radio, while the ‘conventional’ inputs and the gutsy, rich sound will make the most of your CDs and even the TV. This is very solid value for money, and an attractive listen.

Heather Small  You Do Something To Me

Taken from her Colour My Life set, which also includes reworkings of her big M People hits now with lovingly scored orchestral backing, which the rich, clean Denon sound really brings out, this cover of a Paul Weller classic is a real spin-tingler, not least because Small’s distinctive voice still sounds as powerful and luminous as ever.

Combining Gaelic folk with electronica, complete with deep, deep basslines, the latest album from Isle of Skye band Niteworks, A’ Ghiran, will give any system a workout with its constantly shifting soundscapes. It sounds weighty, controlled and intriguingly different via the Denon, streaming from a CD quality Bandcamp download.

The 2022 BBC Proms season is available via the iPlayer for a year online, and is worth dipping into – especially for this emotional and invigorating concert by the Ukrainian Freedom Orchestra, featuring a fine performance of Chopin’s Piano Concerto no. 2 by Anna Fedorova. If you thought Internet radio was just for background music, the Denon will make you think again.

The PMA-900HNE is sensibly priced, beautifully built, and lavishly equipped without compromising its sound, this is an ideal amplifier to update an old system or move into the network music age. It’s also simple to use, wherever you source your music, able to drive a wide range of speakers, and compact enough not to take over your whole living-room.