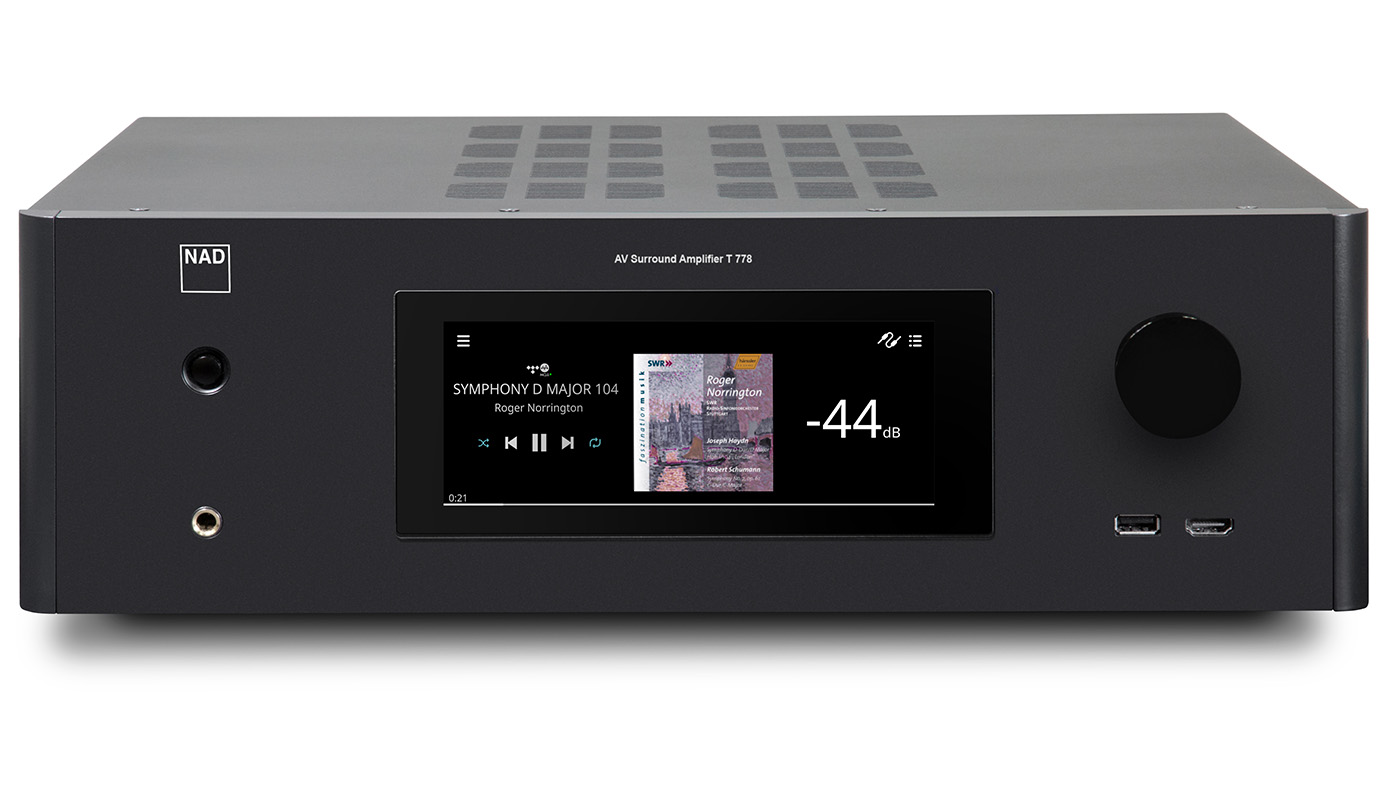 NAD has been making high quality but affordable HI-Fi amplifiers and AV receivers for decades, and the T 778 is the perfect example of this corporate philosophy. This nine-channel AVR combines superior performance and solid build quality, with a price that won’t break the bank.

It also incorporates some imaginative features like a large full-colour touchscreen display, and NAD’s modular design for future expansion - a real advantage and certainly not greenwashing.. Add in Dolby Atmos, DTS:X, BluOS multiroom streaming, and Dirac Live room correction, and you’ve got a very tempting prospect.

The NAD T 778 makes full use of its Hybrid Digital amplification to produce a front soundstage that’s clear, detailed and very well defined. If you love music, you’ll be delighted by the clear delivery and wide stereo imaging that places instruments with exacting precision.

Once you switch to multichannel audio the strengths of the NAD’s amplifiers are all too apparent, especially with a power 5.1 mix like Dunkirk. The amps are able to handle sudden changes in volume with remarkable agility and speed, and the all-important headroom makes for a very dynamic experience, especially as the Stukas dive-bomb the beach.

The T 778 does a superb job of decoding the different channels, and seamlessly steers effects from one speaker to another. The dialogue is wonderfully clear and focused on the action, while the Dirac Live room correction ensures any subs you’re using are perfectly integrated with the speakers in the system. The result is bass that’s smooth but also deep and impactful.

When it comes to object-based audio formats like Dolby Atmos the receiver draws on all its strengths to produce a thrilling immersive experience. Regardless of which speaker configuration you choose, the Atmos and DTS:X decoding is flawless. Once you add in all that powerful Class D grunt, and cutting-edge room correction, the result is a system that’s balanced and cohesive.

Watching the film Midway in Atmos reveals an engaging and incredibly dynamic soundscape that places you within a sonic bubble. The overall delivery is controlled and precise, sending planes flying around the room with unerring accuracy. The explosions pepper the ceiling, and audio effects are panned with speed and clarity. The result is an amazingly visceral acoustic experience.

The NAD T 778 doesn’t look like a conventional AV receiver, swapping a bewildering array of buttons and dials for something altogether more stylish and less intimidating. It’s also modular in its design, providing two slots that allow NAD to easily upgrade for future digital formats.

The front is dominated by a large full-colour touchscreen, with the only other controls being the power button and volume dial. There’s a headphone jack, a USB port and an HDMI input, but otherwise the front facia is clean and minimalist in its approach.

The touchscreen makes setup and operation as simple and intuitive as possible, only showing the controls you specifically need to keep the interface uncomplicated, while retaining options for fine tuning if necessary. There’s also playback information and cover art, which looks very cool.

As groovy as the touchscreen is to look at, the chances are you’ll actually be controlling the T 778 using the provided remote, and thankfully this makes for an effective alternative. There’s also the BluOS app, which offers remote control, music streaming, and multiroom functionality.

The rear connectivity is fairly extensive, with the emphasis on HDMI. There are five inputs and two outputs, one of which supports eARC. None of the HDMI connections support 8K or 4K/120, but the modular nature of the T 778 means this should be easy for NAD to address with an upgrade.

The wireless connectivity includes Wi-Fi and AirPlay 2, plus the T 778 is Roon Ready, and it supports Spotify Connect and Tidal Connect, with full decoding of MQA for high resolution audio. As a result this AVR sounds as good with music as it does with movies.

When it comes to delivering today’s immersive audio film soundtracks, the NAD has nine channels of built-in amplification that uses the company’s Hybrid Digital technology. This improves the efficiency, delivering powerful distortion-free amplification that’s rated at 85W a channel, even when driving all nine simultaneously.

The T 778 can decode Dolby Atmos and DTS:X for up to 11.2 channels, so add an extra two-channels of amplification and you can run a fully-immersive 7.2.4-channel system with two subwoofers. There’s also class-leading room correction thanks to the inclusion of Dirac Live, ensuring the overall system has smooth, well-integrated bass and a cohesive tonal balance.

This monster mash-up of King Kong and Apocalypse Now has an Atmos soundtrack that’s as sonically enjoyable as the film itself. Helicopters fly overhead, machine-gun fire rips across the room, and the titular giant ape gives the sub a thorough workout as he tumps his chest and roars.

The ill-fated lunar mission is recreated so accurately that some scenes were actually shot in zero-g. The DTS:X soundtrack is equally impressive and immersive – from the raw power of a Saturn V launch to placing you inside the crippled space ship as it buckles and creaks all around you.

The NAD T 778 represents an evolution in the development of AV receivers, offering user-friendly ergonomics that will appeal to regular consumers, while still delivering the kind of high quality sonic performance that’ll put a smile on the face of the most demanding home cinema enthusiast.

The nine channels of Hybrid Digital grunt are powerful, clean and responsive, while the decoding of Dolby Atmos and DTS:X is flawless. The inclusion of Dirac Live room correction ensures all the channels are delivered in a cohesive fashion, especially when it comes to integrating the subs.

Add in slick BluOS streaming and support for high-resolution music streaming services, and you have an accomplished AVR that will appeal to music and film fans. Only the lack of HDMI 2.1 disappoints, but NAD’s modular design will allow the company to address this with an upgrade.