TV & Home cinema reviewsHiFi  reviewsGuides videos & Live sign up helpline
Menu
By clicking “Accept”, you agree to the storing of cookies on your device to enhance site navigation, analyse site usage, and assist in our marketing efforts. View our Cookie Policy for more information.
Open peferencesDeny allAccept all
Written by
Bruce Black
August 29, 2022

Get a free 15-MINUTE consultation with one of our experts.
Book a consultation
Return to
Music systems 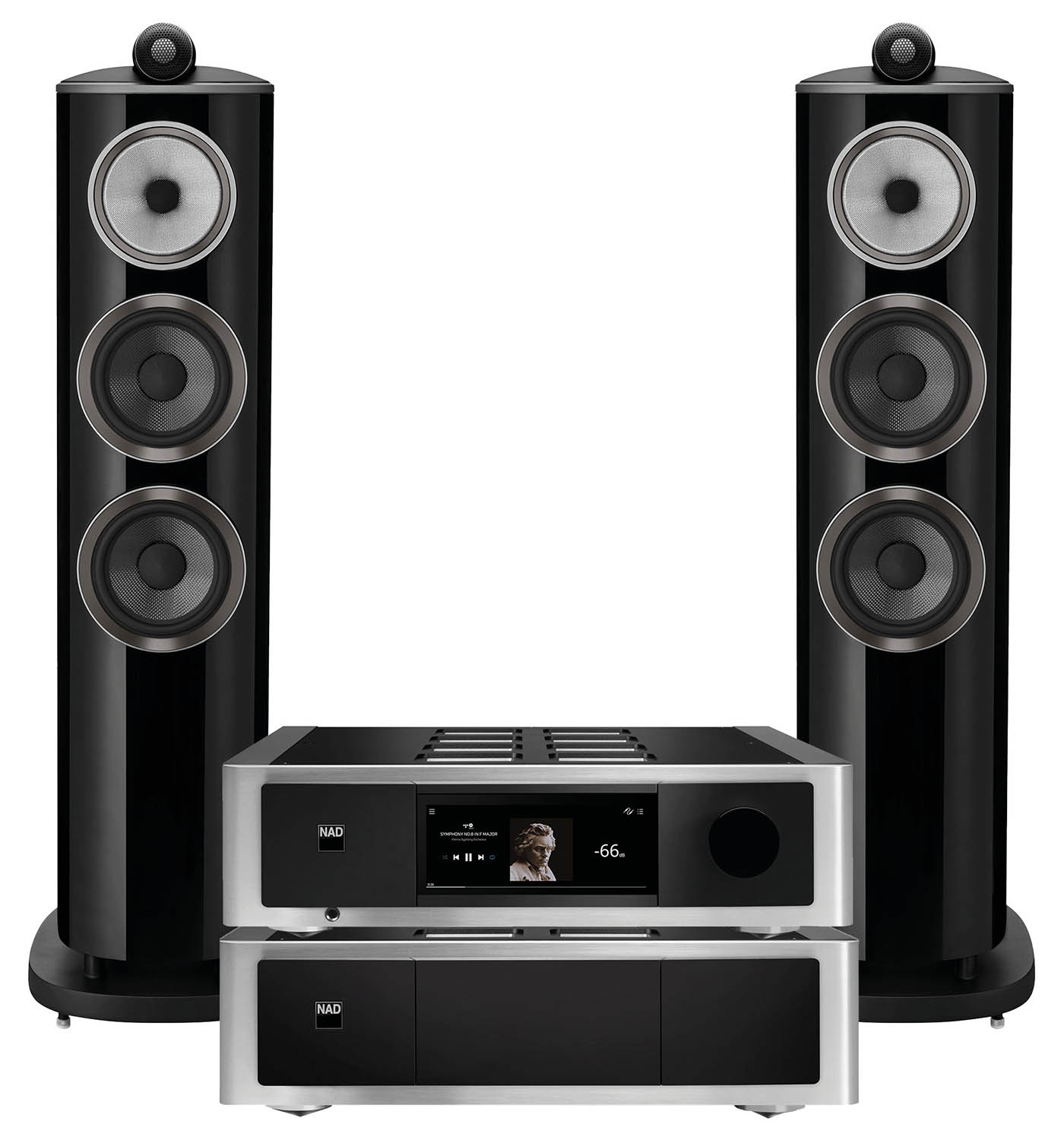 Every Sound Advice reviewer agrees that performance is the most important aspect of any piece of kit, and we strive to recommend the best possible models. What differs, though, is the approach to getting that superlative result. Some like to fiddle and tweak, changing a cable here, moving a speaker there, in order to wring out the very last bit of detail… Others prefer the convenience route – switch it on and let the equipment speak for itself.

The NAD Masters 33 streaming amplifier, with its just-released partnering M23 power amp, and the Bowers & Wilkins mid-range 804 D4 floorstanding speakers satisfy both schools of thought. Switch on this system and the results are immediately sublime. But, if the mood takes you, there are plenty of opportunities for tweakery.

We’ll get to the sound quality in a minute but this recommended stereo music system is unusual in another way because the NAD Masters M33 and M23 amps are exclusive to one retailer – Sevenoaks Sound and Vision, while the speakers are more widely available.

NAD has been around for 50 years or so making good value, quality hi-fi. Innovation has always been high on the agenda and the M33 and M23 don’t shy away from that.

For starters, they look fabulous. The NAD Masters series is typified by rounded corners, brushed aluminium trim and matt black panels. The M33 adds a large, clear, colour touch-screen that gives you loads of info. Underneath is a clever magnetic isolation system in which the pointy feet clink into dinky little metal dishes to stop the transfer of sound-spoiling vibrations.

However, it’s not just a matter of looking the part; much is going on inside these two gutsy, highly efficient class-D amplifiers, manufactured by NAD under license from Danish firm Purifi Audio. The result is an extremely clean and clear delivery with unwanted noise and distortion being virtually zero at all frequencies and output levels. While the M23 provides oodles of uninhibited, distortion-free grunt, the M33 is where the functions are taken care of. Essentially, it’s a streaming amp, controlled by the easy-to-navigate BluOS app, with a copious array of inputs, including HDMI for the TV/ Blu-ray, and a comprehensive selection of music streaming sources and radio.

We opted for connecting the M33/M23 combination in bridged mode. The result was a staggeringly powerful 700Watts per channel, compared to a still-impressive 200Wpc when the M23 is used on its own. One slight nit to pick is that the instructions are not great and I got into a bit of a muck and fuddle with the connections to the rear panel. Once sorted (details on the NAD website are exemplary) the results were spectacular.

This NAD duo is happy to cruise along at any volume. We know from past experience that the M33 doesn’t break sweat even at 95%+ of its maximum output, belting out the music with no sniff of distortion. Now with all that extra power on tap, the maximum volume we could take was about 70%. Distortion remained undetectable but, oh my, it goes loud, way past 11!

For those that fancy a bit of fine-tuning, there’s the built-in Dirac Live Room Correction programme, which analyses the room’s layout and then digitally reduces the impact of the surroundings while enhancing speaker performance. It takes about an hour to run through the programme while it takes measurements at various points and then applies the readings to the amp. We didn’t hear a massive improvement, but the stereo imaging was definitely sharper, with crisper definition of individual musical instruments.

Bowers & Wilkins has been at the forefront of British loudspeaker design for decades and the brand has always been a class act.

The 800 started out more than 40 years ago and has been through several generations but a number of characteristics that date back to the inception are maintained. These include separate enclosures within the cabinet for the bass drivers and the distinctive ‘tweeter on top’ design where the treble unit is mounted in a separate pod – in this case a streamlined aluminium casing that helps minimise the transfer of unwanted resonances from other components to the ‘Diamond Dome’ tweeter.

The 804 D4 is arguably the most elegant of the range, helped by the new ‘reverse wrap’ design (borrowed from B&W’s larger, much more expensive speakers. This not only looks the business but has a beneficial effect on the sound as well.

Standing at 110cm tall, the 804 D4 is able to deliver the incredible bass extension with the feeling of space in the presentation typified by many floorstanders but it isn’t overwhelmingly large. But they are heavy – and so hefty that, once in place, they are best left alone on their rock-solid supports. Fine tuning the position of the 804s involves much two-person tweakery.

Frankly, this system is a tour de force of sonic discovery, enlightenment and enjoyment. Yes, having a separate power amp is a bit of an indulgence when the M33 is more than capable of driving the 804 D4s on its own. But the NAD M23 doesn’t turn up to the party empty handed – besides enormous additional power, it adds sharper focus and better definition. The bass is tight and focused, the midrange spacious and the top end the epitome of precision. Across the range there is a cohesion, bringing a sense or order that even The Rt Hon Sir Lindsay Hoyle, renouned Speaker of the House of Commons, would be proud of.

Which component is responsible for what effect isn’t important, the sound of the system as a whole is what matters. And while the overall effect is nothing short of wonderful, three elements are worthy of special commendation: bass extension, transparency and imaging.

The bass depth is simply gut trembling as we’re sure the folks living on the floor below would testify. Such depth is brought about by the combination of the two bass drivers and the downward-firing ‘Flowport’ barrelling onto the aluminium and steel plinth that supports the speakers. Most importantly, that low end force is an integral part of the overall unity rather than something pumping away on its own.

Both the NADs and the 804 D4s are noted for their lack of coloration, delivering absolute transparency from the source and maybe this is what led one reviewer to criticise the M33 for lack of involvement and musicality. To say that “we don’t get that” is an understatement. The M33, and this system as a whole, is rich, dynamic and consistently rewarding, with excellent focus on the musicians and what they’re playing. And that is really what we all want, isn’t it?

Rarely have I seen my partner sit down and really listen to music with the addiction that I do. But that all changed with this system. She loved discovering layer upon layer of new dimensions in old familiar tracks and even new material evoked enthusiastic foot-tapping approval.

Convenience is hugely important in this home and the endless selection of music at the touch of a button, easily accessed via the Blu-OS app on phone, tablet or desktop is pretty near faultless.

However, the transparency and revealing nature of the system shows up huge variations in recording quality; I never realised just how ropey some of my self-ripped CDs were, as well as some material on the streaming platforms.

Our recommended NAD/Bowers & Wilkins stereo system is not one for the faint-hearted. With decent speaker cables, you are looking at close to £19,000, so you need to love your music to justify that.

Listen to it, though, for just a few minutes and the justification speaks for itself. Yes, you could save some dosh by leaving out the M23, and there’s no denying that the M33 on its own is a mighty fine performer, but the additional power adds a musical dimension that is much more than just a load of extra oomph.

A wonderfully sparse track with nearly as much silence as percussion. Cameroonian singer Blick Bassy’s melodic vocals (singing in his mother tongue, Bassa) come as close to a stereo, ‘Left speaker, Right speaker’ demo while still managing to dazzle with engaging musicality.

A full-on, full range organ extravaganza with every pipe making its presence precisely heard, expertly played by Jan Kraybill. The delivery is a masterclass of clarity and heart-warming gusto in delivery. And just watch those bass driver cones get some exercise!

Born in 1926, American blues singer, songwriter and guitarist RL Burnside remained unknown until the 1990s. This recording is brash, noisy, loud, chaotic, and on a lesser system can sound a bit of a mess. However, the M23-M33-804 trio brings order to the rawness and excitement of Burnside’s distinctive voice and guitar style and one hellava rhythm.

Keeping things real is the best way to describe the appeal of our NAD-Bower & Wilkins system, or what goes in one end comes out the other, so to speak. Individually, the speakers and amps are all renowned for transparency, and they complement each other perfectly, there is nothing but the music and an overwhelming sense of WOW! And that’s how it should be.