TV & Home cinema reviewsHiFi  reviewsGuides videos helpline
Menu
By clicking “Accept”, you agree to the storing of cookies on your device to enhance site navigation, analyse site usage, and assist in our marketing efforts. View our Cookie Policy for more information.
Open peferencesDeny allAccept all
Written by
Ed Selley
August 25, 2022

In terms of High End Hi Fi, this is up there with the gods, a new, very hefty, beautiful sounding McIntosh amp 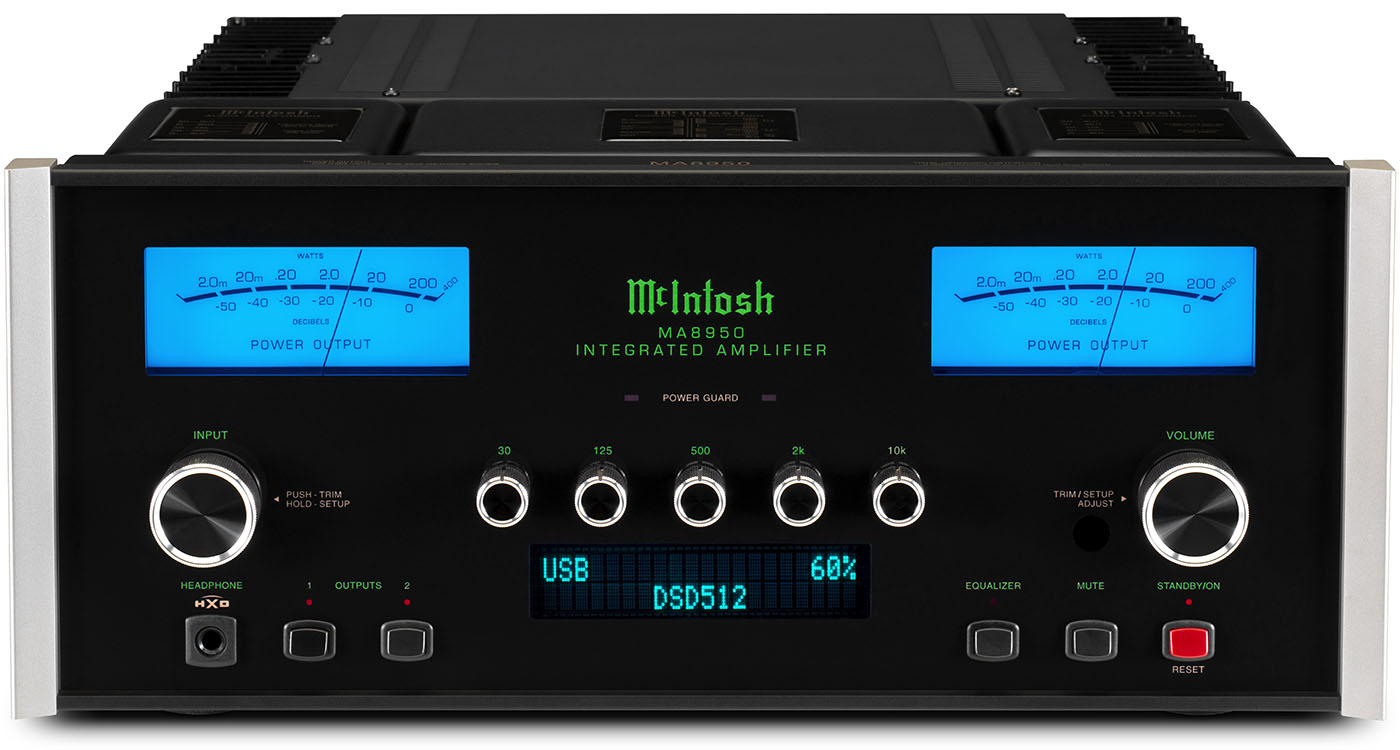 At first glance, the McIntosh MA8950 looks very similar to its ‘little’ (a relative term when dealing with McIntosh) brother, the MA7200. Look a little closer at the specifications and the mystery only deepens. The MA8950 has the same amount of power (and the same unusual specification that involves using devices called autoformers that mean that the McIntosh produces the same 200 watt output at any speaker loads between two and eight ohms). Why then does the 8950 exist and why does it cost more?

The answer is twofold.

On the front panel is a row of five knobs which allow you to adjust output at key frequencies with a view to achieving a flatter response from your speakers in your listening space. This is far more than bass and treble adjustment; with a bit of work, it will allow you to significantly improve the behaviour of your speakers in room. If you don’t want to use such a thing, you can of course switch it out of the system.

Around the back, you will find the customary enormous selection of inputs that McIntosh feels is appropriate. Look closer though and you’ll find some useful additions. The MA8950 has the new ‘DA2’ digital module which uses a higher specification DAC than the older DA1 and includes an HDMI ARC socket to allow direct connection of a TV. Not only will this accept stereo, it can also downmix a multichannel signal too. Together with a complement of coaxial, optical and USB connections, the MA8950 can handle a vast selection of devices- no less than sixteen of them in fact. One minor weakness carried over from the MA7200 is that these inputs cannot be selected directly. Instead you have to cycle through them which is a little laborious depending on which ones you actually choose to use.

Everything else about the McIntosh speaks to the company’s fundamental understanding of how to make genuinely user friendly high end hifi. The MA8950 is simple to use and the combination of the digital display and the VU meters (which look spectacular and are very accurate too) give you at a glance info on what the amp is up to. The remote handset is utterly self explanatory too. Then of course, there’s the small matter of how the McIntosh is built. Yes, it’s (very) big but it feels like an enormous amount of care and attention has gone into absolutely everything. Even judged at the hefty asking price, there is very little that can challenge how solid the McIntosh feels.

It’s easy to look at this hefty bulk of McIntosh and assume that the sound will follow the form; Big, powerful but not exactly the last word in subtlety. This is rather wide of the mark though. True enough, the MA8950 is enormously powerful; there are precious few speakers it won’t drive to their breaking point, but what might be less expected is how delicate the McIntosh can be. Small scale material is replicated with incredible delicacy and nothing is ever forced or made to sound bigger and more powerful than it should be.

Make no mistake though, when you want a big recording played loud, the McIntosh makes everything seem very easy; indeed those VU meters give you a useful clue of how hard you are pushing because there are so few other audible cues as to how hard you are pushing. This is helped by bass extension that is positively subterranean at times. Almost regardless of the speakers you choose to connect to it, the McIntosh will extract deeper, more controlled and altogether more invigorating low end from them than you might have assumed was possible.

What’s more, the equalizer (EQ) genuinely offers (by adjusting the aforementioned five knobs), the scope to get close to a truly flat frequency response in your room. So long as you know what needs adjustment, the effect of the five controls is impressively linear and controlled. There’s no alteration to the tonal balance outside of augmenting or reducing the specific frequency response that they control. The overall performance of the MA8950 remains resolutely consistent throughout. This means that the McIntosh trademark of not being terribly forgiving to poor recordings is consistently applied too but you really have to put awful things into the MA8950 before it becomes unlistenable.

Where the MA8950 really takes this idea and runs with it is how astonishingly consistent it is across those sixteen inputs. There are other amplifiers on the market that combine a moving coil phono stage with an HDMI ARC connection but few of them can do justice to both while maintaining such astonishing even handedness across all of them. It doesn’t really matter how you choose to use the MA8950, it will behave exactly as McIntosh intends it too.

Like most things that McIntosh builds, the MA8950 is on the large side but, so long as you can accommodate it, this is a perfect example of fuss free high end. The huge connectivity means that it will function as the central hub of just about any collection of equipment you can envisage and do justice to all of it. If you are having trouble ‘dialling in’ your speakers to your listening space, the 8950 genuinely justifies its price premium over the similar MA7200.

The MA8950 is a perfect example of McIntosh doing what they do. Behind the unique appearance is an amplifier that can handle almost any partnering equipment and speaker and deliver outstanding performance and flexibility with all of it. This is how McIntosh makes hifi and the results are sensational.

The Weather Station All of it was mine

Delicate, moving and sumptuously recorded, the McIntosh is able to take this beautiful suite of songs and turn it into something that genuinely possesses the character of a live performance and that will have you captivated.

A madcap collection of styles and tones that somehow hangs together to be a perfect album, this is the perfect way to discover that you cannot unsettle the MA8950 no matter what you might choose to throw at it.

Watching the VU meters of the 8950 surge towards their end stops as you give this one the beans probably counts as a bit childish. It’s also really, really (really) good fun. It might look imposing but the big Mac knows how to enjoy itself.

If you are after ‘high end performance’ but have no time for the minimalism and inflexibility of many devices at this price point, the McIntosh is the perfect antidote. It delivers sparkling performance while offering enormous connectivity and user friendliness.