TV & Home cinema reviewsHiFi  reviewsGuides videos helpline
Menu
By clicking “Accept”, you agree to the storing of cookies on your device to enhance site navigation, analyse site usage, and assist in our marketing efforts. View our Cookie Policy for more information.
Open peferencesDeny allAccept all
Written by
Ed Selley
August 8, 2022

Meaty MA720 is beautifully engineered, extracts every nuance and then kicks ass 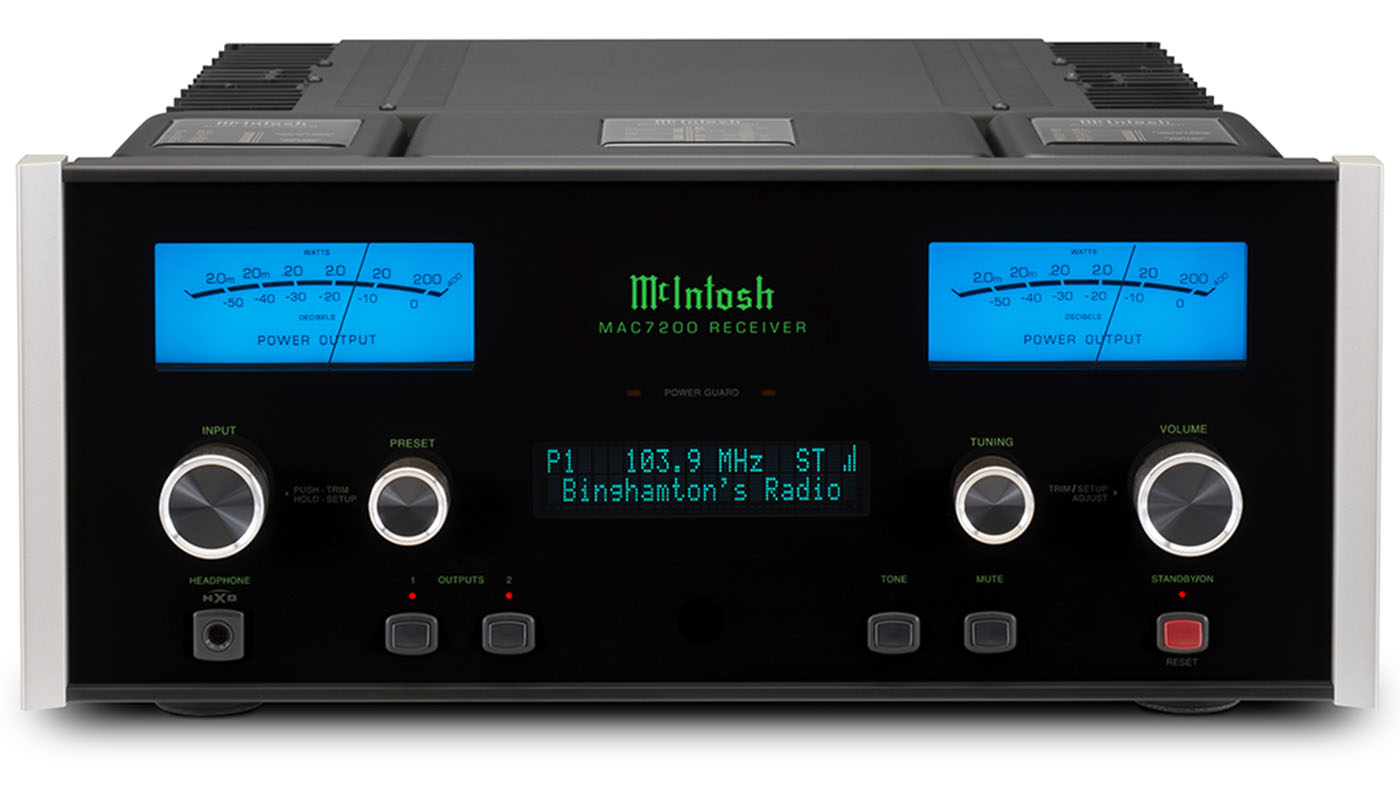 Take one look at the enormously imposing front panel of the McIntosh MA7200 and you might assume that it has been built to channel the current enthusiasm for all things retro. The reality of this striking looking device; all gothic fonts and VU meters, is rather different. The MA7200 isn’t retro, it simply looks like a McIntosh and embodies the values that the company feels to be important.

Absolutely key to this philosophy is mounted halfway down the vast chassis. The MA7200 is a class AB amplifier but it delivers its considerable 200 watt output, regardless of the impedance of what is connected to it thanks to devices called autoformers that match the impedance of the speaker to the output of the amp. Between two and eight ohms, the McIntosh has the same 200 watt output ready to go, from a set of multiple terminals on the back where you select the impedance closest to your speakers.

This vast power output is made available to no less than fourteen inputs. Eight are analogue; five RCA inputs, one XLR and a moving magnet and moving coil phono stage with separate inputs for both. This is joined by a digital board with two coax and two optical connections, good to 24/192kHz, a USB connection able to handle 384kHz and DSD256. This is finished off by a proprietary connection for the company’s CD/SACD transport. If you can see the need to connect a TV in your future, the existing ‘DA1’ digital board can be swapped for the ‘DA2’ which has an HDMI ARC connection for just such an eventuality.

As we have already noted, the MA7200 makes a very definite style statement and that statement won’t be for everybody. Something that will tip the balance in its favour for many people is that it really is beautifully made. Nothing on this amplifier feels ‘good enough.’ Absolutely everything from the perfectly weighted controls to the monogrammed heatsinks (they really do say ‘McIntosh’ when viewed from above) to the beautifully accurate VU meters on the front panel speak to an amplifier that has been assembled with tremendous care. It would be foolish to describe the MA7200 as ‘good value’ but you can see where the money has gone.

First things first, settling back in front of the MA7200 is not like taking a trip back in time. This isn’t some warm, bloomy ‘cossetting but dull’ experience of yesteryear. Instead the MA7200 takes the ideals of its vast and utterly imperious power output and uses it to create a performance that is completely unruffled by anything you throw at it. The most singular aspect of this is the manner that the McIntosh handles scale. It doesn’t matter whether the recording you choose is the whispering of a single vocalist or a full orchestra on the rampage, the McIntosh faithfully recreates this in a believable space.

Within this soundstage, the McIntosh sets about delivering sensational tonal realism. There’s nothing forced here or any unnatural emphasis on any part of the frequency response which means that everything sounds carefully in proportion with everything else and standard tricky tests like cellos and other strings manage to sound as they should. This is not an endlessly forgiving device- feed it a diet of poor recordings and it will let you know about it- but it responds to remotely decent mastering with impressive realism.

There’s one other party piece too. Across those fourteen inputs, the McIntosh is incredibly consistent. A huge amount of effort has clearly gone into insuring you can go from the moving coil phono input to the USB connection and not have any real alteration to the way the MA7200 handles music. If you like what this amplifier does, it is incredibly capable at delivering it via whichever means you choose to use it.

The most significant impediment to happy ownership of the McIntosh is that it is enormous and care needs to be taken to make sure your rack or stand can accommodate it. If you can, you will discover that, striking as those aesthetics might be, this is a genuinely wonderful device to use and live with. The user interface is absolutely top notch and little features like the 12v triggers to start and stop other devices and the ability to level match all the inputs make this a tremendously clever and flexible performer.

In every sense of the word, the McIntosh is singular. It looks, feels, performs and behaves in a way that is different to pretty much anything else on the market. What’s important about this though is that the amplifier that results is an incredibly flexible and user friendly device that goes on to deliver  a level of performance across its many inputs that is nothing short of spectacular. If you fall for the MA7200, very little else will do.

Absolutely peak ELO, the manner which the McIntosh takes the heady combination of orchestral arrangement and proto electronica and makes it big, believable and utterly joyous is absolutely what this amplifier is about.

Matthew and the Atlas Counting Paths

A brass heavy orchestra ensemble with a not quite jazz, not quite swing time signature will upset even some very talented amps but the McIntosh takes it in its stride. If you have a vinyl copy in particular, the phono stage is more than up to the task.

If you have a wide selection of digital and analogue sources you want to tie together in a way that does justice to them all and that performs with consummate ease and consistency, the McIntosh is in a league of its own. So long as you have the space for it, this is an outstanding amplifier.