TV & Home cinema reviewsHiFi  reviewsGuides videos & Live sign up helpline
Menu
By clicking “Accept”, you agree to the storing of cookies on your device to enhance site navigation, analyse site usage, and assist in our marketing efforts. View our Cookie Policy for more information.
Open peferencesDeny allAccept all
Written by
Simon Lucas
October 17, 2022

Get a free 15-MINUTE consultation with one of our experts.
Book a consultation
Return to
headphones, earphones, players, amps 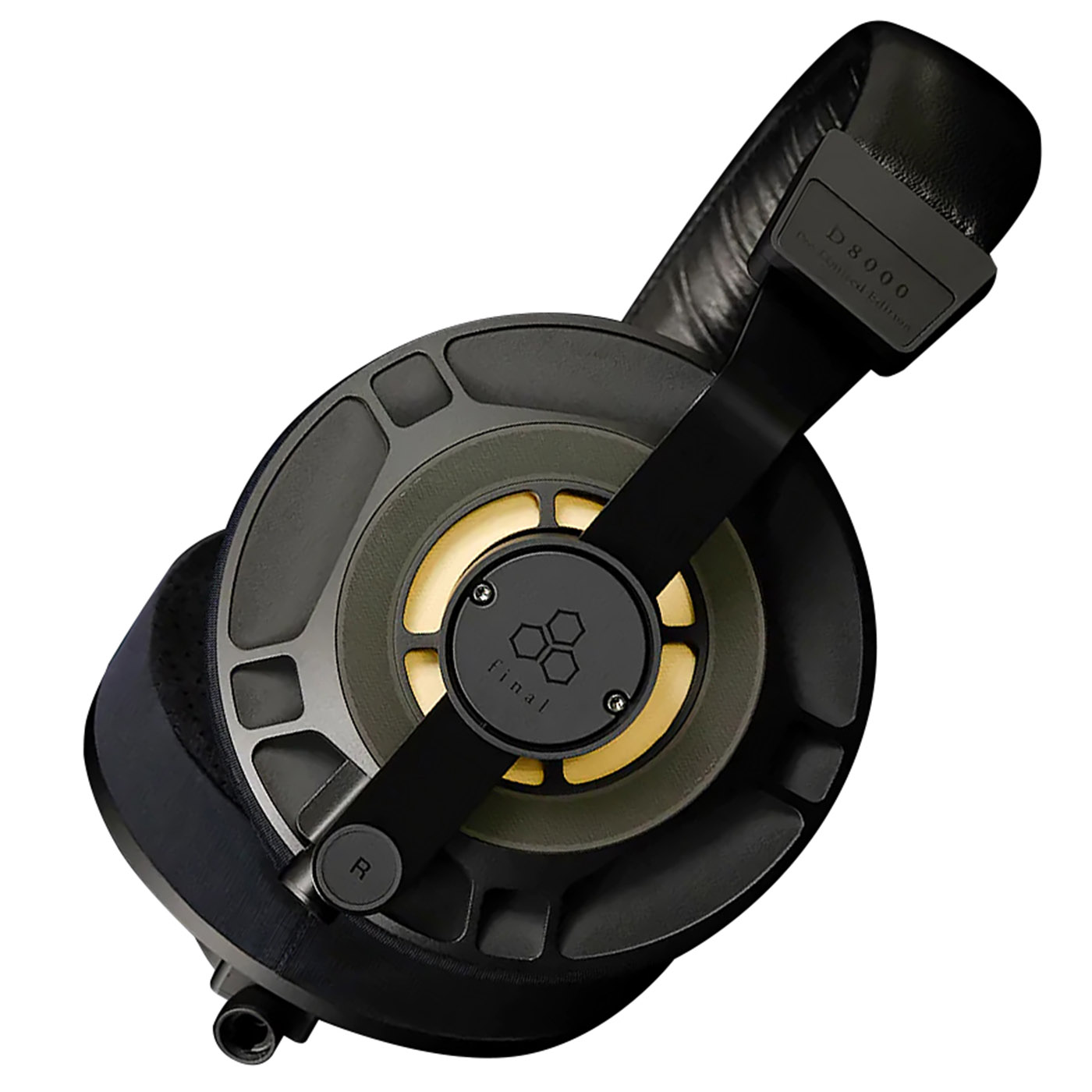 It’s just a single pie, admittedly, but the headphones pie is a pretty big one - and Japan’s Final Audio has plenty of fingers in it. After all, this is a company with a product portfolio that ranges from sub-£20 hard-wired earbuds to, well, the sort of flagrantly expensive and giddily specified over-ear headphones we’re testing here - and all points in between. If you’re in the market for a pair of headphones, of any configuration and any price-point, Final Audio has a pair for your consideration.

Of course, ‘rarefied’ doesn’t do proper justice to the area of the headphones market we’re dealing with here. But if you have the wherewithal, and the sort of system that can do them some justice, the D8000 Pro Limited Edition are almost the dictionary definition of ‘compelling’. You’ll have to act reasonably fast, though - they’re not quite at ‘Wonka’s Golden Ticket’ levels of scarcity, but 300 pairs in total across the globe means their exclusivity is guaranteed.

It should be made apparent from the off that the D8000 Pro Limited Edition can only be judged by the standards of extremely expensive headphones that are already acknowledged as high achievers. The law of diminishing returns is at work in the arena of headphones just as surely as everywhere else in the world of home entertainment - so to suggest that these Final Audio aren’t ten times better than, say, Sony’s WH-1000XM5 is to miss the point somewhat.

And with that caveat out of the way, we can cut to the chase: the Final Audio D8000 Pro Limited Edition sound simply thrilling, and are capable of making your favourite music sound new, fresh and exciting every time. If it’s sonic engagement you crave, the sensation of performance, and utter fidelity (for better or worse) to the recording you’re listening to, you’ve come to the right place.

Their powers of resolution, of detail retrieval, of staging and of atomic-level insight are considerable. No occurrence in a recording is too minor or too fleeting to elude them, and there isn’t a recording too dense, too complex or too performer-heavy to fox them. The stage they create is big, three-dimensional and entirely believable - the performers on it are locked in position, and all have a little pocket of space in which to do their thing. And the spaces between them, the silences and absences, are absolutely pitch dark here, too.

The painstaking planar magnetic driver arrangement proves its worth in delivering what is, by prevailing standards, startling low-frequency extension and control. There’s bite at the opposite end, but not a hint of grittiness or edginess - unless, of course, the music you’re listening to has that emphasis in the first place. The midrange is alive with detail both broad and fine, eloquent when it comes to allowing singers to express themselves, and integrates seamlessly with the frequency information both above and below.

Dynamic potency is considerable, both where the headline ‘quiet/LOUD/LOUDER STILL’ action is concerned and the miniscule harmonic variations (suddenly) apparent in an unaccompanied instrument are concerned. There’s admirable certainty to the way the Final Audio express rhythms, entirely convincing and naturalistic tonality in every circumstance, and tremendous positivity to the overall presentation.

Of course, these are open-backed headphones - and so all of these sonic attributes are just as apparent to the people sitting around you as they are to you as the actual wearer. But as long as you accept that enjoyment of the Final Audio D8000 Pro Limited Edition is a solitary pursuit, there’s very little else to concern yourself with.

As far as Bling For Your Buck goes, the Final Audio D8000 Pro Ltd Edition don’t really have it. Oh, they feel extremely sturdily made and properly finished - but when you line up these headphones against other, similarly headily priced alternatives, there’s no two ways about it: they don’t look anything special.

That they have it where it counts, though, is not up for question. The matte black magnesium alloy housing feels as good as it looks, and the hanger arrangement does good work in both keeping the headphones comfortable and mitigating their 523g weight. There’s no mitigating the size of these headphones, mind you - even with the headband adjustment as tight as it will go, the smaller-headed among us are going to feel over-headphoned.

Inside the carry-case (which, judging by its looks and dimensions, should by rights should house a pistol and a silencer) there are a couple of extremely hefty cables, terminated to suit all upmarket applications.

Final Audio has given a lot of thought both to the planar magnetic drivers which deliver the sound and the earpads behind which they sit - and the sonic results, as should by now be obvious, are apparent. Firstly, the company has conjured a technology it calls AFDS - Air Film Damping System. Whereas conventional planar magnetic drive units have (relatively speaking) abbreviated low-frequency response, because deep bass at high volume can cause the diaphragm to contact the magnets that drive it, these drivers are able to deliver significantly greater frequency extension. AFDS is, at its simplest, a diaphragm braking technology - but Final Audio suggests it’s nothing short of a reinvention of the planar magnetic methodology. And for the D8000 Pro Limited Edition, the inner meshed plate of the driver is gold-plated for both efficiency and just a hint of visual pizazz.

At the same time, the company has reassessed the role of the earpad section of headphones. Sealed earpads can help compensate for the lack of bass extension that was, until now, the inevitable trade-off of planar magnetic technology - but, of course, breathable earpads are preferable when it comes to user comfort. By boosting low-frequency extension with its AFDS technology, Final Audio feels able to fit the D8000 Pro Limited Edition with newly developed ‘Washi’ (traditional Japanese paper) earpads that are breathable, durable and reject moisture effectively - as well (of course) as being delightfully comfortable.

How much are you prepared to pay for headphones that manage to look nothing special while sounding about as special as they come? No, the Final Audio D8000 Pro Limited Edition are no one’s idea of a bargain - but the lucky 300 souls who get to own a pair may conceivably come to realise they’ll never need to buy another pair of headphones as long as they live.

Joni Mitchell Rainy Night House
There’s weirdly instinctive ‘correctness’ about the way the piano in this recording sounds when the Final Audio have pored over it, and they give the remarkable purity of Mitchell’s vocal tone full expression too - especially when the idiosyncratic self-harmonising begins.

Spiritualized Come Together
Psychedelic gospel indie performed by an ensemble bigger than the biggest of Big Bands, with hopeless junkiehood as its main lyrical motif. Ordinarily this is a dense, hazy and elusive recording, but the Final Audio have the authority to bring order to bear.

David Sylvian Praise (Pratah Smarami)
In which Sylvian channels his inner Alice Coltrane and serves up a series of electronic pads and fills with just the right amount of drag and drone. The Final Audio fix them in space, leaving the yearning vocal line more than enough elbow-room.

Because you admire one job done thrillingly well; because you prefer to hear, rather than see, where your hard-earned headphones budget has gone; because you like the idea that you’re unlikely in the extreme to encounter anyone else who owns a pair.

Frequency Response: not given