TV & Home cinema reviewsHiFi  reviewsGuides videos helpline
Menu
By clicking “Accept”, you agree to the storing of cookies on your device to enhance site navigation, analyse site usage, and assist in our marketing efforts. View our Cookie Policy for more information.
Open peferencesDeny allAccept all
Written by
Steve Withers
April 7, 2022

The AVC-X8500HA is the pinnacle of this design ethos, with 13 channels of power and a host of cutting-edge specs

Denon has spent decades building a sterling reputation in the AV amplifier and receiver market, and with good reason. The brand excels at delivering powerful multi-channel units that boast every home cinema feature imaginable. The AVC-X8500HA is the pinnacle of this design ethos, cramming 13 channels of grunt and a host of cutting-edge specs into a single tank-like chassis.

The X8500HA drives up to 13 channels right out of the box, allowing you to build a highly immersive audio system without resorting to additional amplification. It can also decode various layouts, including 9.1.4 for those wanting width speakers, and 7.1.6 for those who fancy a full complement of overhead channels. There’s even the option of two independent subwoofers in a 13.2 configuration, for a more balanced bass performance.

Despite squeezing 13 channels into the X8500HA’s not-inconsiderable chassis, Denon hasn’t skimped on the power. There are 13 Class A/B amplifiers in a monoblock design that deliver a whopping 210W per channel, so no matter which speaker layout you choose, there’s sufficient power to ensure this multichannel behemoth won’t run out of steam. This amp also retains a clean and neutral sound, making it an ideal partner for most speaker packages.

While Denon’s amplifiers and receivers are best known for their prowess with movies, the X8500HA is no slouch with music either. Listen to Suede’s 90s classic Dog Man Star and you’ll be immediately mesmerised by the album’s complex guitar-work and symphonic sweep. There’s some lovely stereo imaging going on as well, resulting in the vocals and instruments being placed across the front of the room with precision, ensuring detail, scale and authority.

An ability to handle music is all well and good, but anyone investing in a 13-channel amplifier is probably more interested in how the X8500HA delivers film soundtracks. This is where the Denon effortlessly struts its stuff, creating a multichannel system that’s tonally balanced, allowing effects to be seamlessly steered from speaker-to-speaker. The result is a cohesive soundstage where dialogue, music, sound effects and bass are all reproduced with consummate skill.

The X8500HA can make any surround mix sound good, but feed it a modern object-based audio format and you’ll find yourself enveloped in an acoustic bubble. The film Midway boasts a Dolby Atmos soundtrack that’s a masterclass in immersive design, with planes flying around and above you, flak peppering the room, and seismic explosions hitting with perfect timing. The Denon rises to the challenge, delivering a visceral sonic experience that will leave you shell-shocked.

The X8500HA is a sophisticated piece of kit but it’s a snap to install, and thanks to Denon’s intuitive Setup Wizard you’ll be up and running in no time. The Audyssey room correction is equally user-friendly, employing the included microphone to balance the speakers, better integrate the subwoofers, and eliminate the more egregious acoustic qualities of your room.

The amplifier itself doesn’t deviate from Denon’s standard design template, with an easy-to-read and informative display sandwiched between large dials for selecting the inputs and adjusting the volume. A drop-down flap hides the other controls and front inputs, helping to keep things tidy, the construction is military grade, and there’s a choice of black or premium silver finishes.

The excellent remote control includes a handy backlight, an equally impressive remote app, and support for the HEOS multiroom system, allowing you to seamlessly connect with other HEOS speakers in the house. Music lovers will benefit from high-resolution audio support, and Disney+ users can enjoy many of their favourite Marvel movies in IMAX Enhanced.

The ‘A’ suffix denotes the latest version of the X8500H, which adds HDMI 2.1 inputs and outputs. This means the amplifier doesn’t just pass 4K and HDR (including Dolby Vision), but can also handle 8K video and 120Hz high-frame-rate gaming. In terms of other connectivity, there’s built-in Wi-Fi, Bluetooth, and AirPlay 2, plus it also works the Amazon Alexa and Google Assistant.

The X8500HA is so feature-packed that it’s hard to find fault, but if you’re a radio-head there’s no built-in tuner – which is why it’s an amplifier rather than a receiver. The processing is also ‘limited’ to 13.1 channels, but that really should be sufficient for most people. Otherwise Denon’s high-end model offers exceptional value-for-money, especially when you consider all that you’re getting.

Christopher Nolan’s war epic is a reminder that a well-designed 5.1 mix can still sound fantastic, and the Denon expertly marshals all the sonic forces as Stuka dive bombers screech down from above, sinking ships submerge you in water, and explosions hit with foundation-shaking bass.

This cracking Dolby Atmos soundtrack makes full use of all the extra channels, especially when the titular oil rig explodes. As fire and debris erupt all around you, the X8500HA expertly steers the audio objects with precision, causing you to dive for cover as you’re engulfed in the destruction.

This multitalented AV amplifier can also decode DTS:X, and Peter Jackson’s remake uses all of the channels at its disposal to immerse you in action during the climax on the Empire State Building. Planes buzz around like flies, bullets strafe the air, and Kong lets out a monstrous roar.

The X8500HA has been picking up accolades since its launch back in 2018, with AVForums claiming an unrivalled immersive audio performance and awarding its coveted Reference Status badge. Home Cinema Choice also applauded this feature-packed 13-channel amplifier’s inherent value for money, awarding five stars and a Best Buy badge.

If you’re looking for a single-box solution to quickly and easily build an immersive audio system, this is the AV amplifier for you. Everything you need is under the hood, with 13 channels of power, processing for every audio format imaginable, and a host of features that include HEOS multiroom. A classic design and robust construction round out a near-perfect package, while HDMI support for 8K and next-gen gaming features ensures a pleasing degree of future-proofing. 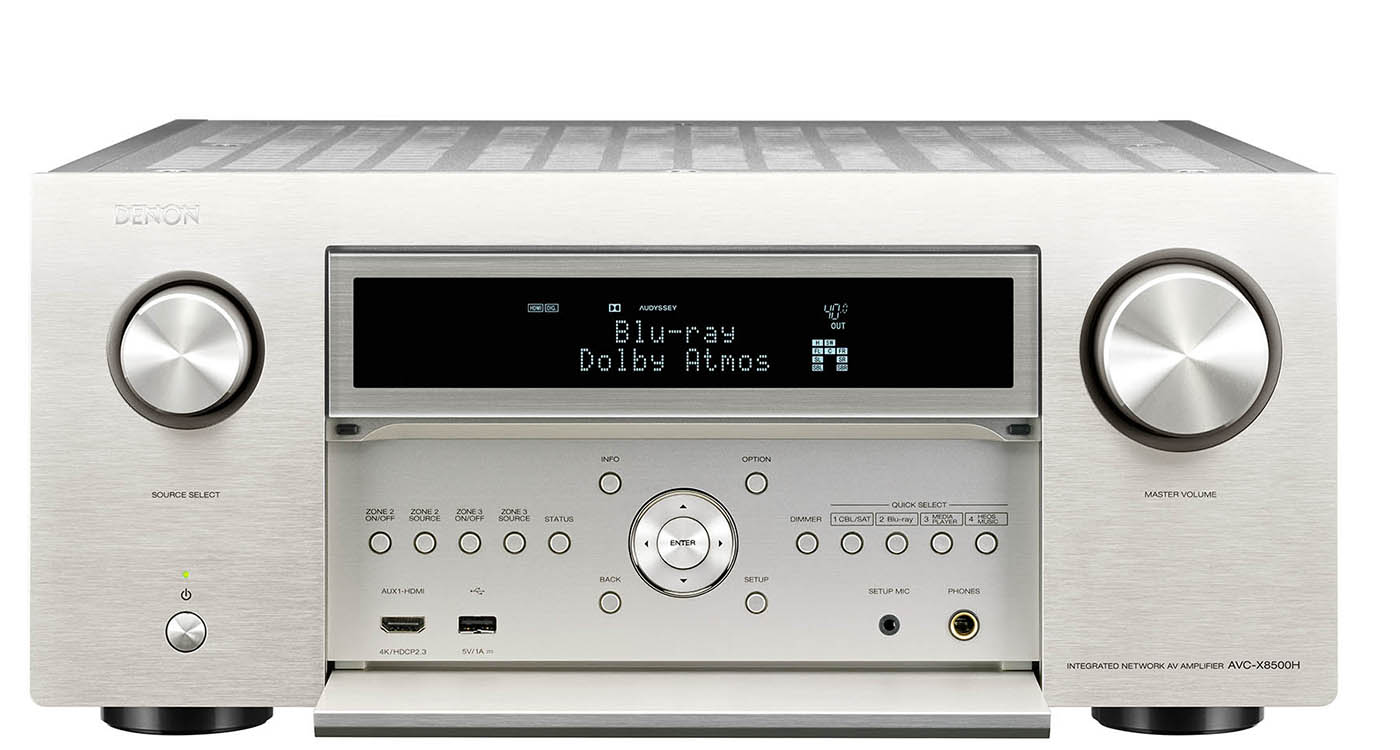 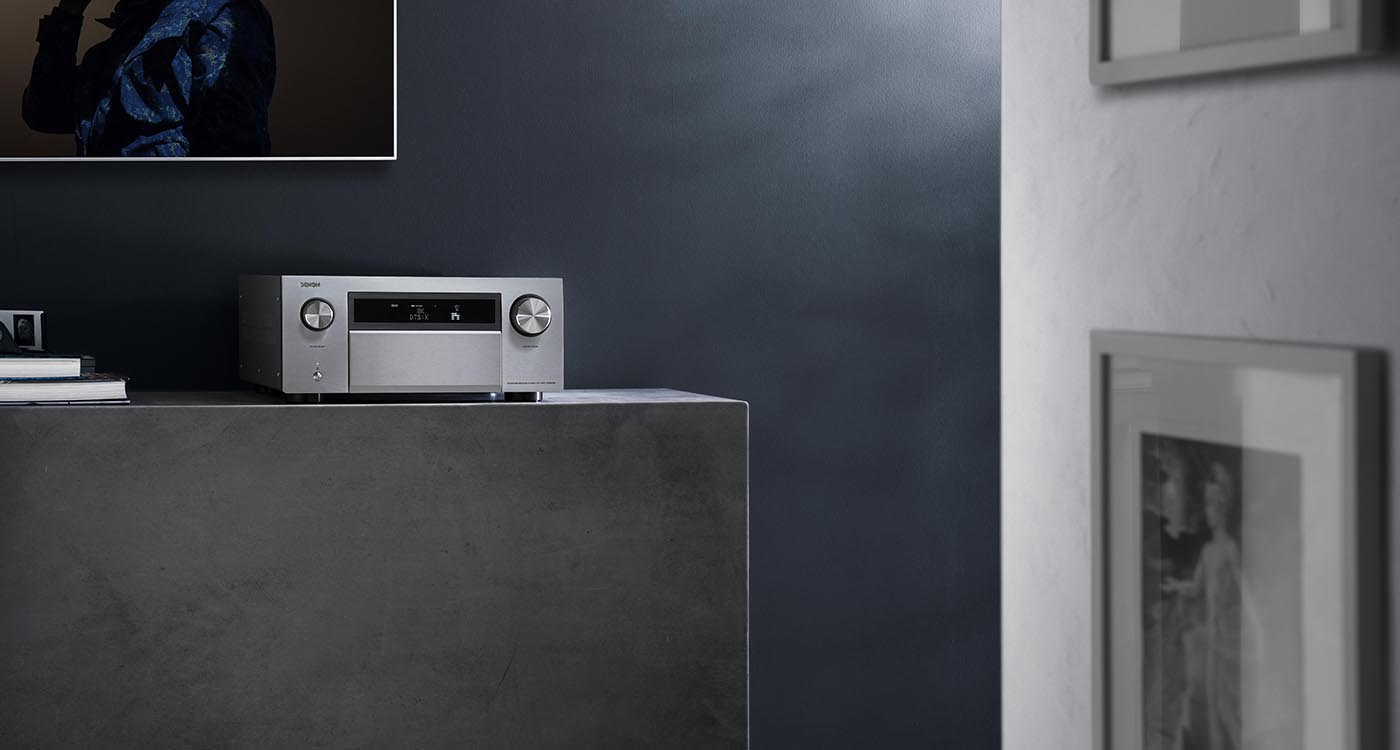 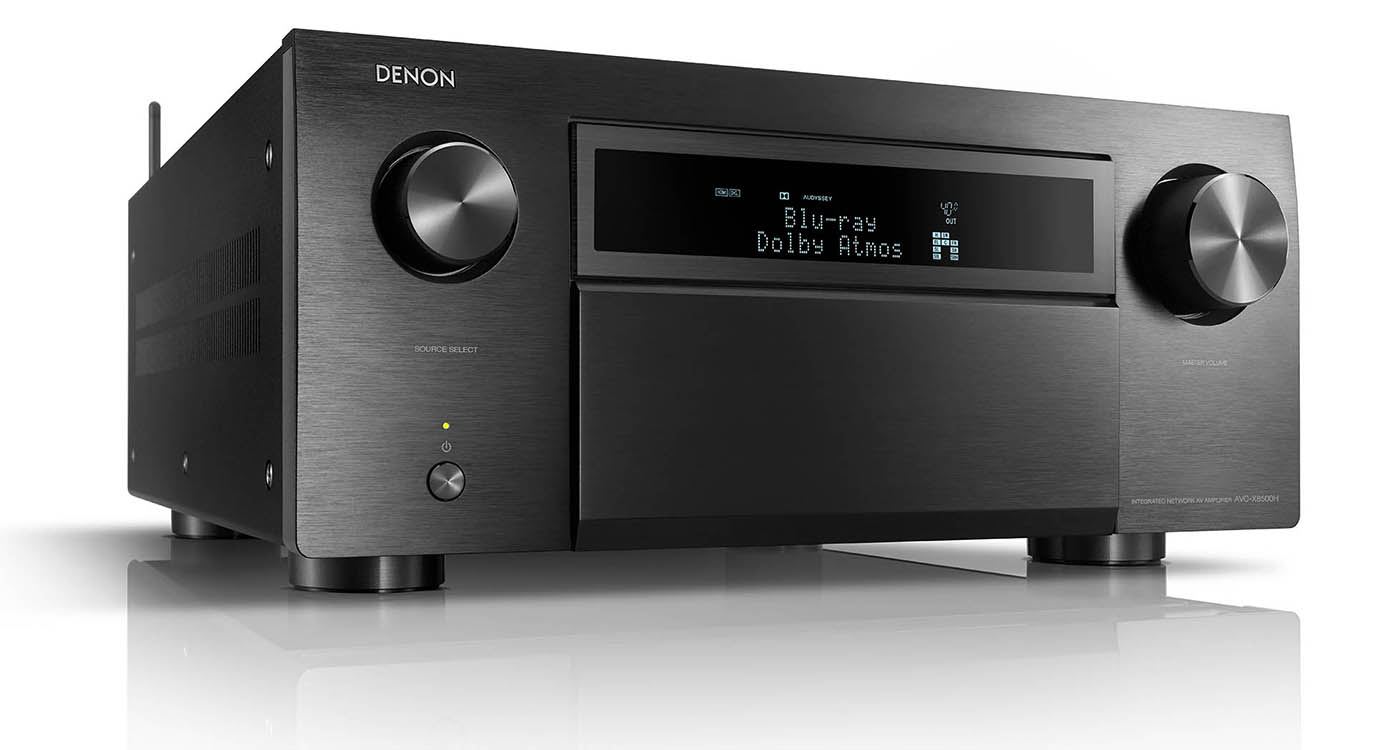