There's some good deals around on this superb AV Receiver, we've seen it for £1999

It’s often said that AV receivers and amplifiers are great for movies but not so good when it comes to music. The Marantz SR8015 dispels that myth completely, by combining the company’s distinguished Hi-Fi pedigree with the multichannel mastery of corporate sibling Denon.

The Marantz SR8015 is built around eleven channels of high-quality amplification capable of delivering 140W of powerful juice to each connected speaker. How many speakers you actually choose is entirely up to you, but this AV amplifier supports a 7.2.4 system out of the box, that’s seven for the main channels, two for subwoofers and four overhead channels.

The Marantz is capable of processing up to 13 channels, so if you want to go full-immersion nutter and run a 9.2.4 or 7.2.6 configuration with added width or overhead channels, then simply add a quality two-channel power amp to drive the front left and right channels, while using the built-in grunt to handle everything else.

Whichever speaker layout you choose, the SR8015 supports a full complement of object-based audio formats, so no matter how you watch your favourite movies (disc or streaming) this accomplished amp has you covered. The multichannel processing is exceptional, with seamless steering of effects from channel-to-channel, well integrated bass, and beautiful tonal balance.

All these attributes are on show when watching Godzilla vs Kong, a film with a Dolby Atmos soundtrack as inventive as it is complex. The scene where our heroes enter the ‘Hollow Earth’ involves a loss of gravity, and the Marantz orchestrates the spinning audio effects with a weightless touch that is wonderfully precise in its directionality and immersion.

However, what makes the SR8015 especially interesting is its ability to wow audiophiles as well as film fans. There’s an undeniable warmth and detail to this amp’s delivery of music, with fantastic stereo imaging and localisation of instruments. Partner it with a high-quality pair of floorstanding speakers and you’ll have a system that’s as capable with two-channel stereo magic as multichannel blow your socks off audio.

The SR8015 has a comprehensive set of features but is mercifully easy to setup thanks to a clever wizard. The Audyssey room correction is equally intuitive, using an included microphone to seamlessly integrate the subwoofers, and tonally balance the multichannel system.

The amplifier sports Marantz’s usual minimalist styling, with a small circular display between the input and volume dials, and a larger display, controls and front inputs behind a drop-down flap. The build quality is excellent, and there’s a choice of black or silver-gold finishes.

The excellent remote sports a handy backlight, while the equally impressive HEOS app creates a multiroom system that seamlessly connects with other HEOS speakers in the house. There’s also high-resolution audio support, allowing you to make the most of the Marantz’s inherent musicality.

The HDMI 2.1 connections allow the amplifier to pass everything from 4K and HDR (including Dolby Vision) to 8K video and 4K/120Hz high-frame-rate signals. There’s also built-in Wi-Fi, Bluetooth, and AirPlay 2, plus the SR8015 works the Amazon Alexa and Google Assistant.

If you’re looking for negatives, the single HDMI 2.1 input is bad news if you own both next-gen gaming consoles, and there’s no tuner – hence amplifier rather than receiver. The processing is also ‘limited’ to 13.1 channels, but otherwise the SR8015 is as fully-spec’d as they come.

This film about monsters attracted to noise has a Dolby Atmos soundtrack that makes full use of the SR8015’s dynamic range, going from silent to terrifyingly loud in an instant. Audio objects and frequent use of the overhead channels also make for an effectively multi-layered sonic experience.

This circus musical may be historical humbug, but it’s full of toe-tapping numbers that allow the Marantz’s syncopated talents to shine through. From the chest-pounding bass that accompanies the opening number to crowd-pleasers like This is Me, the Atmos soundtrack is a showstopper.

Steven Spielberg’s dino thriller is a masterclass in sound design, and the T-Rex attack in a storm at night remains its sonic highpoint. The SR8015’s DTS:X decoding ensures the rain is falling all around you, thunder rumbles overhead and the film’s star delivers an eardrum-bursting roar.

Audioholics awarded the SR8015 five stars and hailed its the best AV receiver they had tested to date. Sound+Image magazine thought the Marantz was simply brilliant, and as good as you can get in a home cinema multichannel amplifier

The Marantz SR8015 is an extremely well-made and highly capable AV amplifier that may lack a tuner but includes just about everything else. Despite this comprehensive array of features it remains easy to setup, with the intuitive Audyssey room correction doing an admirable job of bringing all the channels together to create a balanced and cohesive system. The combination of powerful amplification and an inherent musicality ensure this versatile performer sounds fantastic whether you’re listening to your favourite song or watching the latest Hollywood blockbuster. 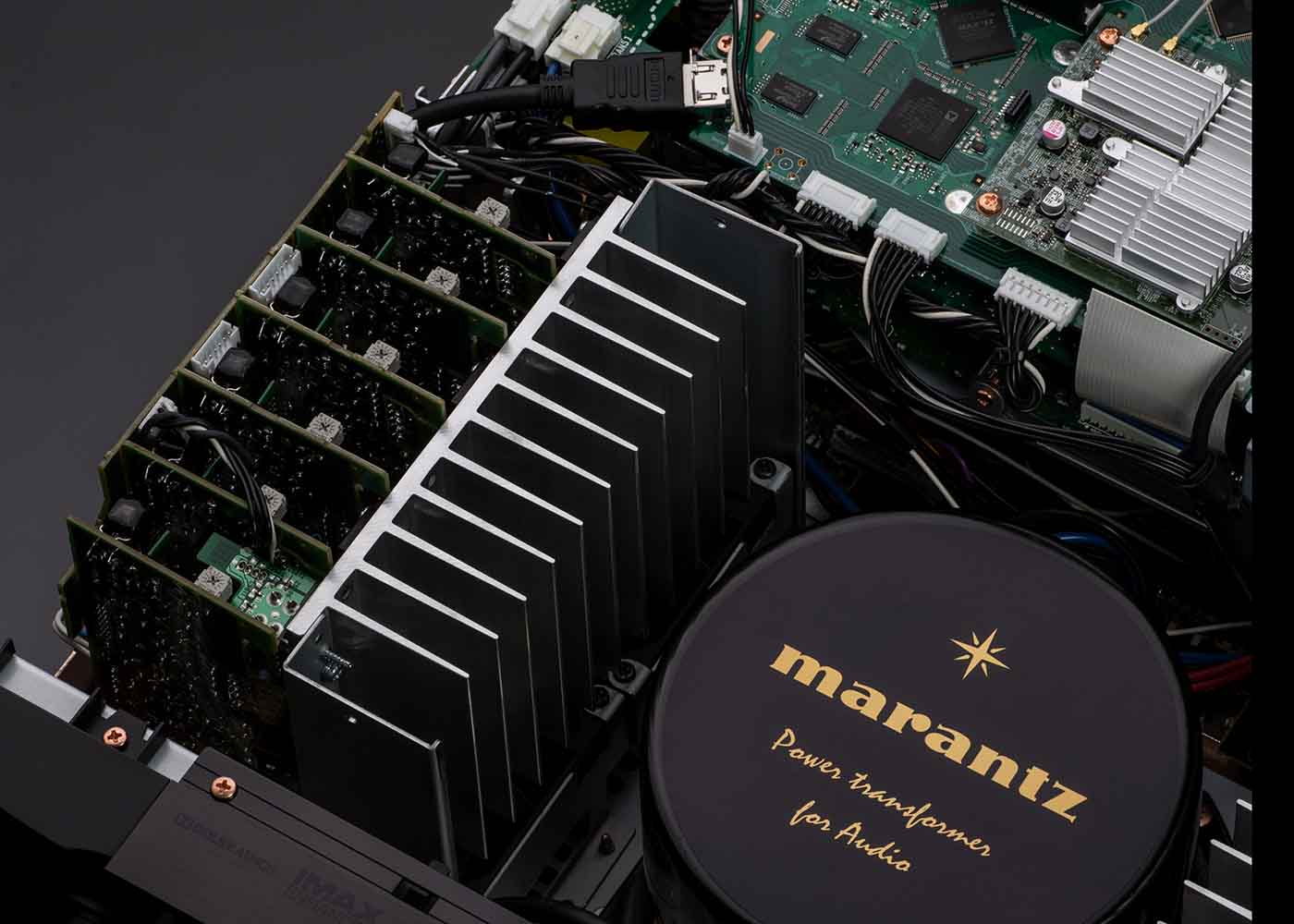 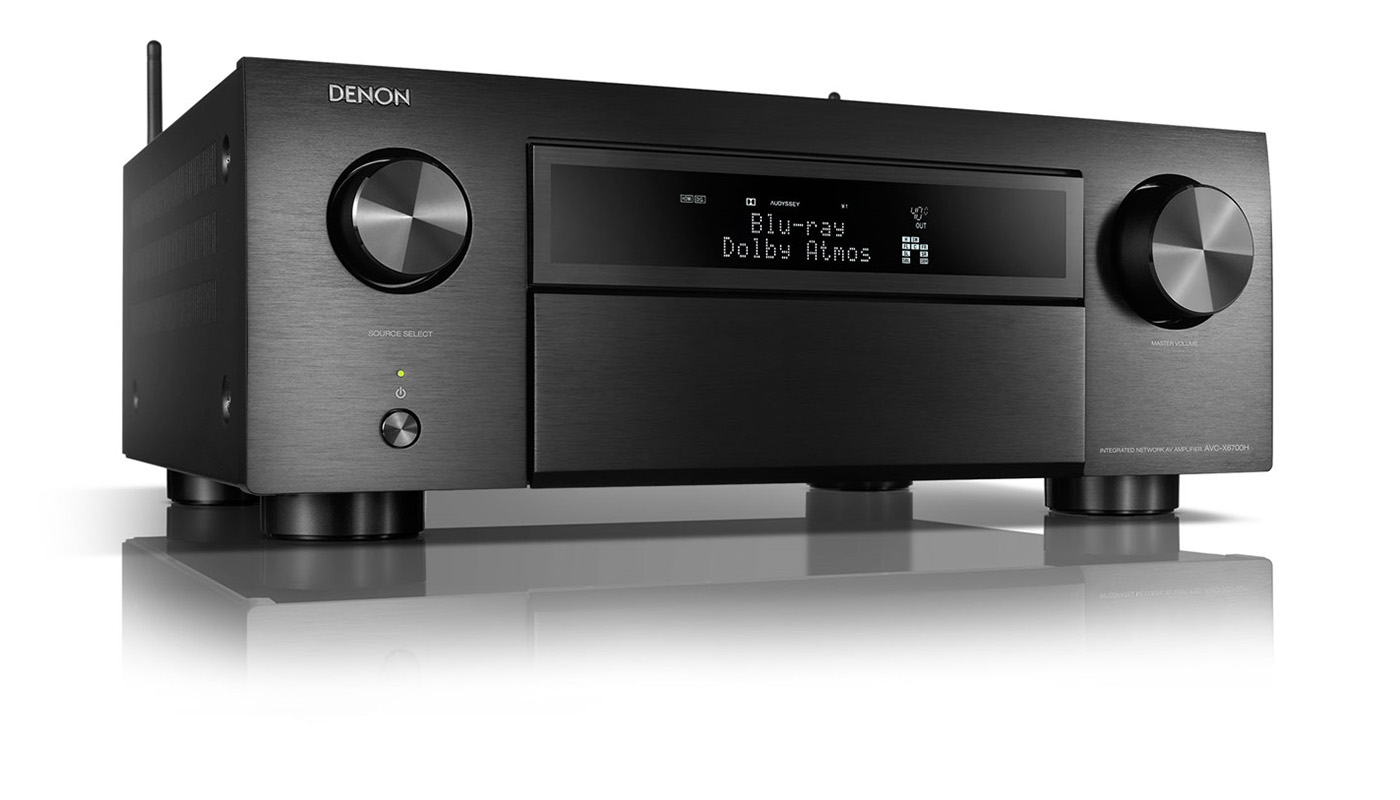