TV & Home cinema reviewsHiFi  reviewsGuides videos & Live sign up helpline
Menu
By clicking “Accept”, you agree to the storing of cookies on your device to enhance site navigation, analyse site usage, and assist in our marketing efforts. View our Cookie Policy for more information.
Open peferencesDeny allAccept all
Written by
Steve Withers
July 27, 2022 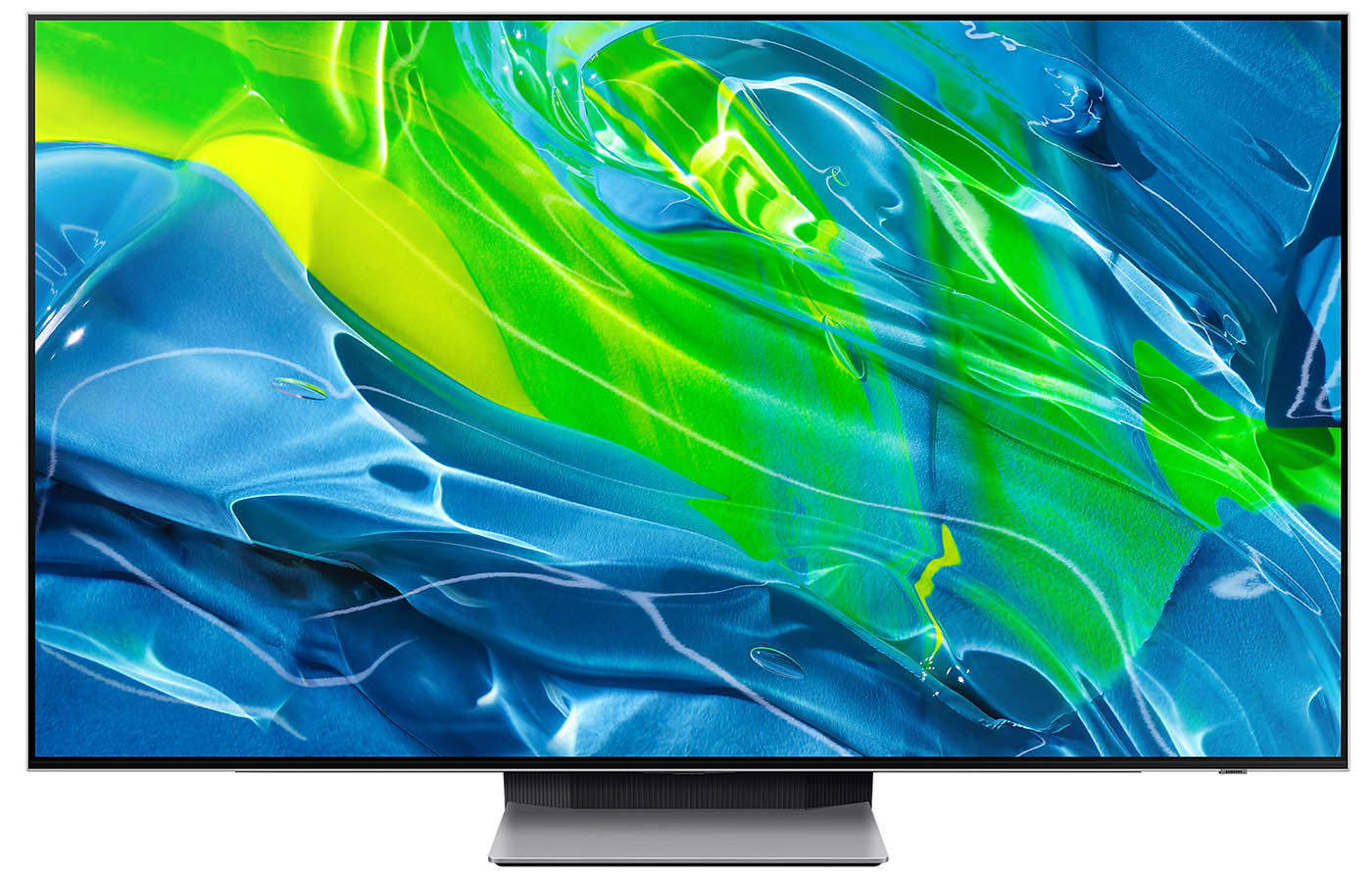 Samsung returns to the OLED market for the first time in nearly a decade with a new spin on the established TV tech that uses quantum dots to deliver richer colours and brighter highlights.

The S95B is competitively priced as well, with a 55-inch model that costs £1,799, and a 65-inch version that retails for £2,799. A stylish ultra-slim design rounds out a very tempting package.

The Samsung S95B takes all the benefits associated with OLED, and takes them to another level. The new panel design employs a blue OLED to self-illuminate each pixel, with additional quantum dot layers used to create the red and green colours.

This approach eliminates the issue of the blue OLED decaying faster than the OLEDs used for red and green, but also results in colours that are bolder and truer, while the overall luminance and specular highlights are both significantly brighter.

The inclusion of a Filmmaker mode means you get highly accurate pictures at the press of a button, and the resulting SDR images really impress with natural-looking colours, finely rendered detail, and inky blacks – just as the content creators intended.

This fidelity is equally applicable to HDR, thanks to precise tone-mapping that ensures all the information at both ends of the dynamic range is delivered without crushing the shadows or clipping the bright parts. The result is an impactful picture with exceptional levels of contrast.

The self-emissive nature of OLED not only produces deep blacks, but also allows it to deliver crisp highlights with pixel-precision, ensuring that sunlight reflecting off metal or glass looks utterly realistic. Crucially, the new panel design is also able to deliver brighter full-screen images.

The use of quantum dots unlocks richer and more nuanced colours, and when combined with the increased luminance the result is HDR that pops off the screen with a dazzling vitality. The S95B also achieves this without sacrificing accuracy, thus retaining the original artistic intent.

The 4K Neural Quantum Processor takes all the improved contrast and expanded colours and then applies class-leading processing to produce 4K images that are incredibly clean and bursting with fine detail. No matter the quality of the source, the S95B will upscale and enhance with skill.

The motion handling is equally impressive, with the 24p motion of movies and TV dramas rendered perfectly, resulting in movement that’s free of unwanted judder or artefacts. There’s extra processing for fast-paced sports if necessary, and support for higher frame rate gaming.

The panel uniformity is excellent, with no signs of banding or other issues, and in testing there were no problems with image retention or screen burn. Finally, the self-emissive nature of OLED means the contrast and colours continue to look stunning if you’re watching from an angle.

The Samsung S95B’s audio performance isn’t quite as impressive as its visual prowess, but given the panel’s size-zero slimness that’s hardly surprising. There’s limited room for speakers and, as Scotty was fond of saying in Star Trek, you can’t break the laws of physics.

However, you can bend them a little, with Samsung’s Object Tracking Sound (OTS) applying advanced AI-enhanced processing to create a more expansive sonic presence. Vocals are especially clear, and the inclusion of Dolby Atmos adds a degree of sound dimensionality.

There’s a feature to optimise the acoustics to match your room, just don’t expect any real bass, and don’t push the volume too high. There’s also support for Q Symphony, so partner it with a compatible Samsung soundbar and you’ll be rewarded with a fully integrated sound system.

Living with the S95B

The S95B is a piece of cake to setup thanks to Samsung’s SmartThings app, and the Tizen-powered smart system is comprehensive in its choice of video streaming apps. The response can be sluggish, and the layout overwhelming, but whatever you want to watch, you’ll find it here.

Samsung provides two remote controls: a standard black plastic zapper; and a stripped down metal wand that uses solar-power for recharging, thus making changing batteries a thing of the past. There’s also voice control thanks to the inclusion of Bixby, Alexa, and Google Assistant.

The design is eye-catching, with a panel that’s only millimetres thick, and minimalist stying that looks very contemporary. The ultra-slim chassis is a little wobbly, but once attached to the stand the TV is more robust. Just be careful when moving it, or attaching a bracket for wall mounting.

Despite the limited real estate, there’s a full compliment of connections, including four HDMI inputs. They all support 4K/120, HDR10, HLG, HDR10+ Adaptive, and ALLM, plus eARC on HDMI 3. There’s also support for variable refresh rates, including AMD Freesynch and Nvidia G-Synch.

This is a great TV for gamers, not only because it has next-gen features, but also because of its incredibly low input lag of 9.2ms. There’s a useful Game Bar that brings all the key controls into a single interface, along with a new Game Hub that offers a choice of streamed gaming services.‍

This film about the life of astronaut Neil Armstrong boasts some of the most challenging HDR scenes imaginable, especially as the crew of Apollo 11 first go into lunar orbit. These high contrast moments destroy LCD TVs, but look stunning on the S95B.

This fun Marvel adventure boasts plenty of highlights that benefit from QD OLED’s increased brightness, but it’s the gorgeously saturated colours on Ego’s home planet that fully demonstrate the wider gamut afforded by the S95B’s use of quantum dots.

This powerful WW1 drama boasts Oscar-winning cinematography that the S95B renders in all its native 4K glory. The use of HDR10+ also delivers some stunning HDR, especially the nighttime scenes with their inky blacks, detailed shadows, and dazzling flares.

You should buy the Samsung S95B if you want dazzling colours and highlights that really pop. The QD OLED panel lives up to its early potential, and thanks to AI-enhanced neural processing, goes far beyond it, resulting in stunning images with movies and next-gen video games alike.