TV & Home cinema reviewsHiFi  reviewsGuides videos & Live sign up helpline
Menu
By clicking “Accept”, you agree to the storing of cookies on your device to enhance site navigation, analyse site usage, and assist in our marketing efforts. View our Cookie Policy for more information.
Open peferencesDeny allAccept all
Written by
John Archer
July 18, 2022 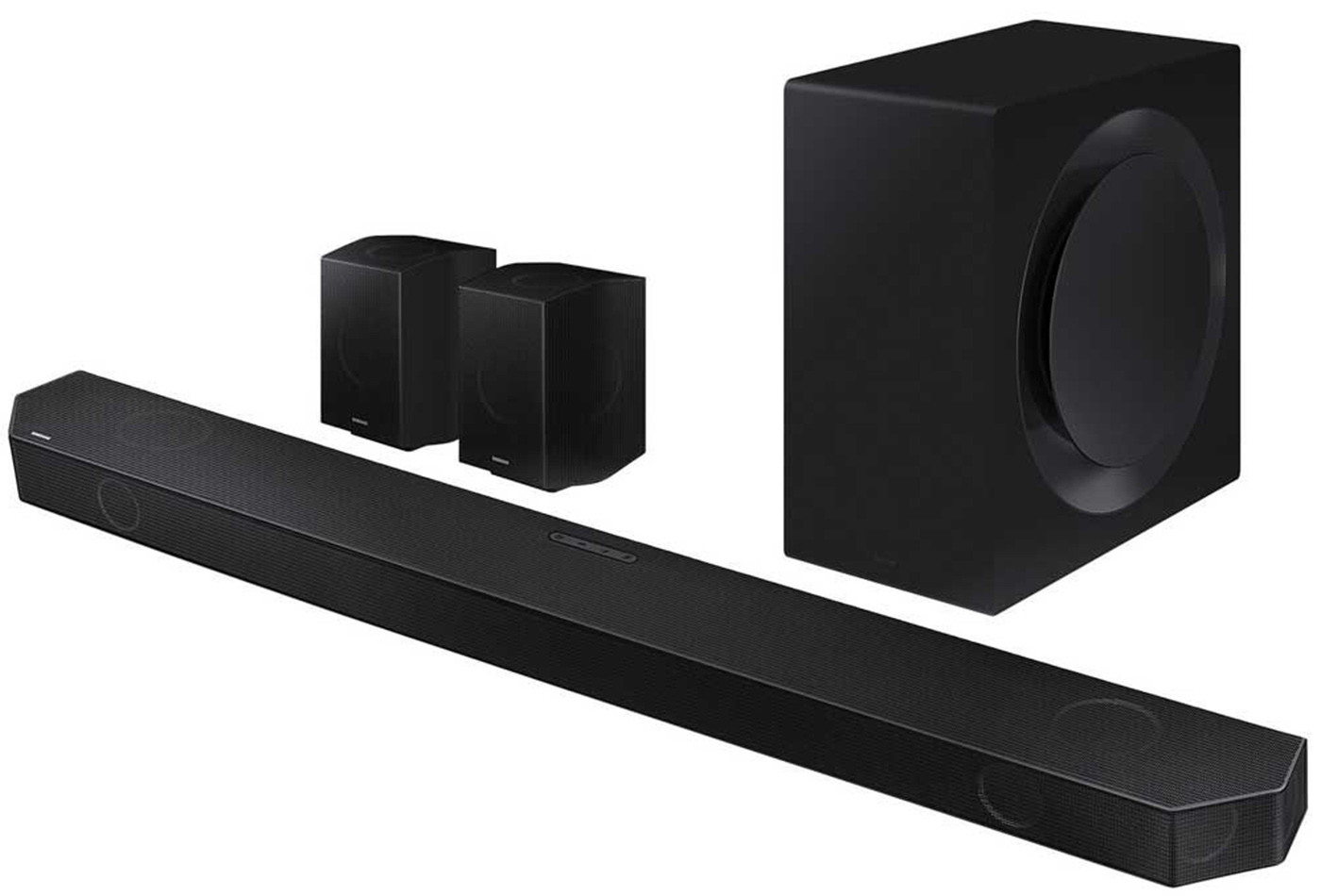 The arrival of a new flagship Samsung soundbar usually means two things: a new world record number of audio channels for a soundbar, and the most all-round immersive home cinema experience you can get without shifting to the greater expense and space-challenging nature of a separates-based system.

Samsung’s new HW-Q990B, though, breaks the trend by failing to introduce any more channels than we got with its Q950A predecessor, leaving it having to rely on other attractions to keep Samsung’s impressive soundbar reputation intact.

Fortunately, it doesn’t take long listening to the Q990B to realise that the effort Samsung might previously have put into shoe-horning in extra audio channels has gone instead into making its predecessor’s already excellent sound, even better.

While the Q990B’s channel count might have stuck at 11.1.4 (which, to reiterate, is still class leading for the soundbar world), the sound its four-component system produces is more immersive than ever.

With the DTS:X and Dolby Atmos soundtracks that currently represent the pinnacle of home cinema sound, you ideally want to hear a perfect hemisphere of sound wrapping all around your seating position, complete with rear, side, front, centre and height/overhead effects, all underpinned by enough bass to make it sound as if a T-Rex really is running through your living room. No soundbar gets closer to this ideal movie sound experience than the Q990B.

For starters, the improvement to its rear channel performance is startling. Samsung has redesigned the included rear speakers so that the drivers built into the top edge angle their sound forward slightly better, while also adding a little plinth to their bottom edge that seems to reduce/remove colouration from whatever surface the speakers are sat on.

The rears continue to carry rear side firing drivers as well as the previously mentioned up-firers and more traditional forward firers, and these join the tweaked up-firers in crafting a more complete rear half of the Dolby Atmos sound ‘dome’ than we’ve heard from a soundbar before.

Also significantly improved from last year’s Q950A is the Q990B’s bass handling. The subwoofer incorporates a new Acoustic Lens system, where a circular deflector sits an inch or so above a large eight-inch driver to help spread bass more evenly and smoothly around your room. Bass depths still reach as legendarily low as we’ve come to expect with Samsung’s flagship soundbars, but low frequencies now roll through your room with more controlled attack and nimbleness.

The Acoustic Lens attachment also seems to make the Q990B’s subwoofer attach even more seamlessly to the bottom end of the main soundbar’s frequency range.

The sound from the main soundbar component of the Q990B’s system appears the least changed from what’s gone before. It still delivers, though, an impressive combination of centre, left, right, front side left, front side right, side left, side right and two more up-firing channels of sound with a remarkable combination of power and precision, completing the front half of the Atmos sound dome peerlessly well.

Of course, creating a dome of sound is only half of the Dolby Atmos/DTS:X story. The Q990B also then needs to populate that dome with positional effects accurately enough to make you feel like you’re in the middle of a living, breathing movie world. Happily it again excels at this, placing effects both subtle and extreme in exactly the right place.

Transitions, where sounds pass down the side of you, from right to left or even overhead, are expertly handled too, especially as the massive channel count leaves no glaring gaps in the a specific moving sound’s ‘journey’.

The extent to which the Q990B delivers all of its strengths with noticeably more refinement, balance and cohesion than 2021’s already excellent Q950A goes beyond the tweaks to the subwoofer and rear speaker designs. This is likely a result of Samsung finally introducing a built-in automatic calibration system to its flagship soundbar that not only works well but re-runs itself daily to make sure it’s always optimising sound for your room set up.

The Q990B additionally supports a bass-specific calibration system designed to monitor and control how well the new subwoofer combines with the rest of the soundstage.

While it’s hard to fault the Q990B as a movie system, as with previous flagship Samsung soundbars it doesn’t adapt to stereo music playback as well as some more Hi-Fi-oriented rivals. It still sounds powerful and dynamic, but things can become slightly dirgy with tracks that have lots of layers and density, and the subwoofer sometimes sounds a little detached or over-aggressive.

If you’re willing to think outside the purist stereo music box, however, the Q990B handles the fast-growing range of Dolby Atmos music mixes very well, and also features a surprisingly effective Adaptive sound mode that remixes stereo music to take advantage of all the system’s available channels.

If you’re attracted to the idea of a soundbar because you want to keep clutter to a minimum, don’t forget that the Q990B ships with four separate components. It’s not a traditional ‘single bar’ solution.

The main soundbar and two rears, though, are actually remarkably compact considering how much volume and precision they can produce, and while the subwoofer is relatively substantial, you can hide it out of the way without substantially affecting its sound.

Don’t forget, either, that all four components communicate with each other wirelessly, so you don’t have to worry about cables running all over your room.

The Q990B features excellent connectivity. It has two HDMI inputs, for instance, as well as an HDMI output with eARC functionality that means it can receive lossless Dolby Atmos sound from compatible TVs. The HDMI loop through system impressively supports all of the current important HDR formats, including HDR10+ and Dolby Vision.

It doesn’t support pass through of 4K/120Hz gaming feeds, but neither do most other soundbars. Gamers can always attach their consoles and PCs directly to their TVs to enjoy 4K/120Hz and variable refresh rates, and then pass the game sound to the Q990B via eARC.

The Q990B is particularly good at setting up Wi-Fi and Bluetooth connections, including enabling recent Samsung phones to share content simply by tapping the phone against the soundbar’s bodywork, and the soundbar can be controlled via a well-organised phone app or voice commands as well as its own remote control.

The Q990B combines all the power and surround sound immersion prowess Samsung’s flagship soundbars are renowned for with a lovely new degree of refinement and cohesion. The best just got better.

The Dolby Atmos mix for Matt Reeves’ latest Caped Crusader reboot is suitably epic, creating a fantastically gritty and immersive sense of Gotham City’s crime-ridden streets and adding massive impact to the film’s many fights and one testosterone-fuelled car chase. All of which feels tailor made to show off what the Samsung Q990B can do.

This under-rated sci-fi actioner features one of the most varied and effective Dolby Atmos soundtracks around, transitioning from subtle ambience to rollicking action at the drop of a hat - and the Q990B’s ability to deliver both power and new-found sensitivity makes it the perfect partner for such a brutally deft mix.

Few Dolby Atmos soundtracks work as hard to use every available sound channel as the suitably monstrous mix that accompanies this surprisingly fun war-time zombie actioner. This gives the Q990B the perfect chance to show off just how well it combines raw power with exceptional effects placement to create that all-important dome of Dolby Atmos sound.

No other soundbar fills your room with Dolby Atmos and DTS:X soundtracks as powerfully and immersively as the Samsung Q990B. Its connectivity and HDR support are both impressive too, and while it comprises four components rather than being a traditional single bar solution, all of those components connect wirelessly, and three of them, at least, are actually remarkably small considering how much power and precision they deliver.