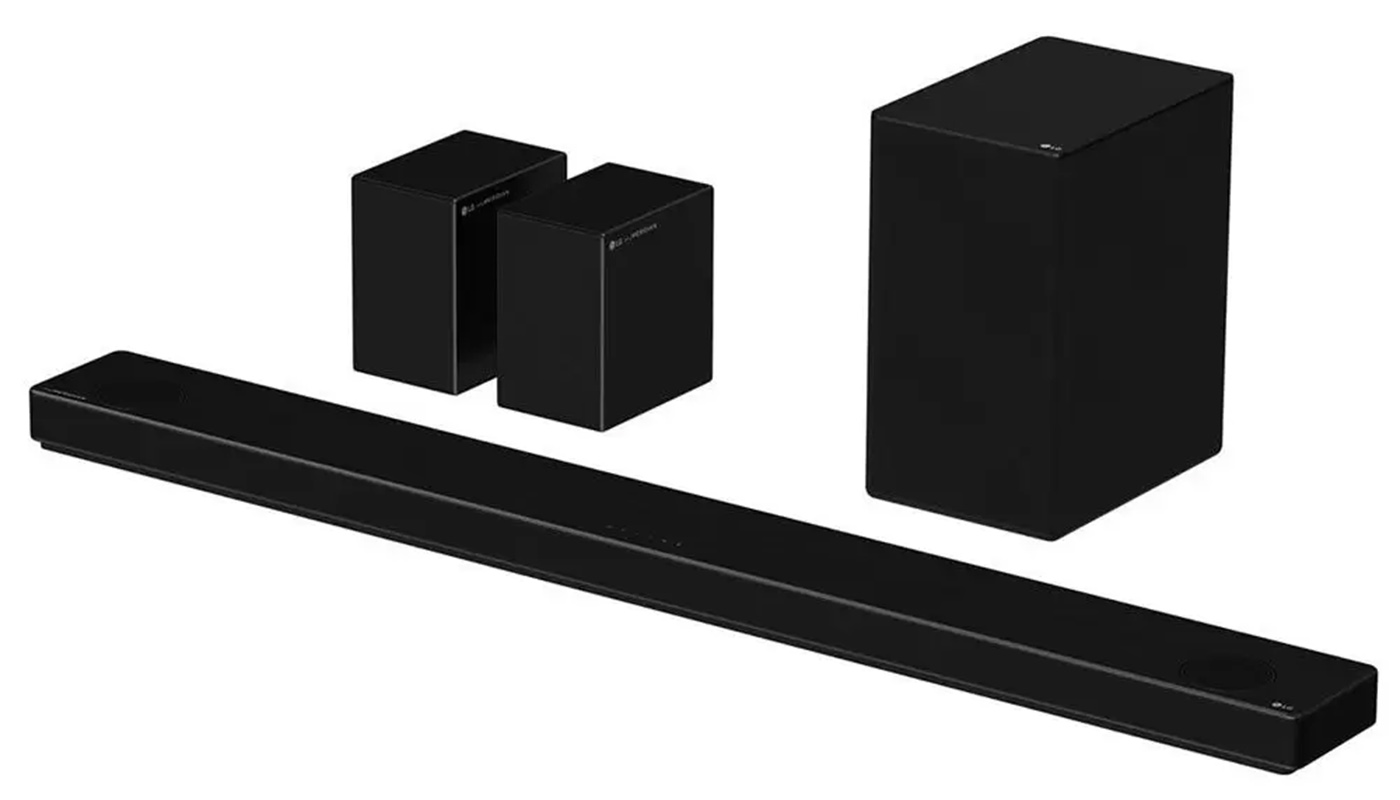 The SP11RA is LG’s current flagship soundbar - a status it earns for two main reasons. First, it comprises four separate components: the large main soundbar, a chunky wireless subwoofer, and two wireless rear speakers. Second, it uses this array of speakers to deliver both DTS:X and Dolby Atmos soundtracks through a seriously healthy 7.1.4 channels of sound.

Add in the close involvement of super premium AV brand Meridian in the SP11RA’s design and audio tuning and you’ve clearly got a soundbar that’s out to take sound quality seriously.

Most premium soundbars have a particular audio attribute that distinguishes them from their rivals. In the SP11RA’s case this point of difference is its phenomenal ear for detail.

No matter how dense, heavy or complex a sound mix might get, the SP11RA will still deliver even its tiniest, faintest sound effect. This gives you a whole new appreciation for the art of film soundtrack mixing, as well as making movies feel busier, more lifelike and more immersive.

The attention to detail also proves that the SP11RA’s speakers have power to burn. If they didn’t then the sort of subtleties the SP11RA revels in would likely be lost in compressed bass and treble extremities.

The SP11RA can typically go seriously loud, too, without the detailing losing any of its clarity, purity or balance. In fact, cranking the SP11RA up actually makes the soundstage more rather than less precise - not least because high volumes make you more aware of just how big a sound stage the SP11RA can cast out.

The SP11RA’s powers of projection (from the rears as well as the main soundbar) make you almost completely forget that the massive 360-degree soundstage you’re sitting at the heart of is coming from just four relatively small physical speaker units. Even Dolby Atmos height effects actually sound at times as if they’re coming from above you thanks to the potency of the up-firing drivers built into the soundbar’s top edge. Many Dolby Atmos soundbar rivals, by comparison, only manage to generate a more vague ‘wall of sound’ effect rather than actual overhead sounds.

The SP11RA’s combination of clarity and projection means, too, that busy action scenes sound exceptionally dynamic and lively, as the system tracks objects moving around the soundstage with fantastic accuracy.

Although it’s built first and foremost for film soundtracks, provided you avoid the slightly muddled ‘Horizon’ music playback mode the SP11RA is also very accomplished as a music player. The knack for detail and clarity remains, but the soundbar moves from surround sound staging to stereo staging with aplomb. While still giving you a scale of sound that most dedicated all-in-one hi-fi set ups can only dream of.

There are a couple of niggles. Hard impact movie sounds can sound a bit muted, which can also occasionally cause the typically impressively precise surround sound staging to suddenly become more vague. Also, while the subwoofer is excellent to a point, it can become a touch drony with the very deepest bass sounds.

If you want to hear absolutely every detail a film soundtrack or music mix has taken the trouble to include, though, the SP11RA is almost spookily good.

Living with the LG SP11RA

The SP11RA’s main soundbar is elegantly designed, robustly built, and slim enough to fit underneath the majority of today’s TVs. The rear speakers are smaller than they have any right to be considering how much noise they can make, too. Only the chunky subwoofer proves much of an imposition on your room aesthetics - but the good news is that you can tuck this away under a sideboard or behind a sofa without affecting its sound.

It’s impressive to see how well the SP11RA is so easily able to switch between music and movies (something soundbars typically find quite difficult), and its support for both Dolby Atmos and DTS:X surround formats is joined by healthy flexibility when it comes to different music file formats.

The SP11RA carries two HDMIs, enabling you to use it as a switching device. These HDMIs don’t support the HDR10+ HDR format, though (just Dolby Vision, HDR10 and HLG). Neither of these HDMIs can pass through 4K/120Hz and/or variable refresh rate gaming feeds either - but nor can those on almost every other soundbar.

The SP11RA’s phenomenal detail and staging of both film soundtracks and music provides a prime example of why premium soundbars are now taking such a bite out of the traditional AVR/speaker separates system approach to home cinema sound.

Riders on the Storm (The Doors) in Dolby Atmos, via TIDAL

While Dolby Atmos remixes of old tracks don’t always work, this one really does. Especially on the LG SP11RA, which has the power and eye for detail to ensure that the Atmos mix’s combination of enhanced atmospherics and more aggressively steered elements are all handled to mesmerising perfection.

The Dolby Atmos mix on this 2020 film makes fantastic use of carefully placed effects to build a convincingly defined and claustrophobic sense of space whenever the title character is around. The SP11RA again does an unusually good job of putting all these effects in exactly the right place - though every now and then this mix does also highlight the way the soundbar sometimes takes a rather gentle approach to what should be hard impact sounds.

Pu the LG SP11RA on the shopping list because of its uniqueness – with the assistance of high-end audio guru Meridian, LG has crafted a 7.1.4-channel soundbar, compete with ‘real’ rear and up-firing height speakers, that produces the most beautifully detailed surround sound movie experience in town.